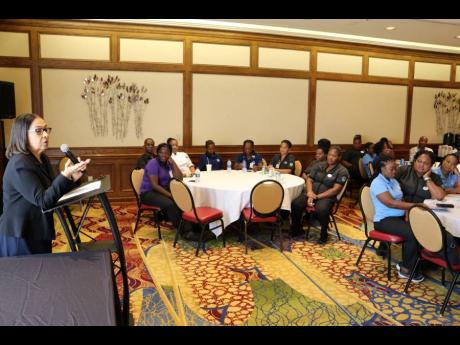 Their exemplary work ethic has created a high demand for Jamaican workers in the hospitality industry in the state of Michigan, United States (US). This was revealed by Minister of Labour and Social Security Shahine Robinson as she toured Michigan establishments hosting Jamaican workers.

Addressing more than 200 Jamaican workers at the Grand Traverse Hotel in Traverse City as part of her July 14-19 official visit, the Jamaican official explained that she was in the Great Lakes State on her annual visit was get a first-hand view of how the programme was working. Robinson’s visit is also intended to help her to reconnect with US legislators and employers and Jamaican workers in an effort to grow the programme and expand the services. The programme has been in operation for 76 years.

Robinson said that because hoteliers have been eagerly requesting more Jamaicans, her ministry was now in talks with the US authorities with a view to expanding the programme. She added that the more than 475 Jamaican workers accounted for at least 50 per cent of the hospitality labour force in Traverse City, Mackinaw City and Mackinac Island. She further noted that the feedback received from the meetings with employers and workers regarding the success of the programme or areas requiring improvement was all valuable to the programme’s strategic growth plan.

“The Government of Jamaica views the programme as very vital,” she told the workers, reiterating how important the ministry’s overseas work programme was to Jamaica and the economy, as well as to the employees and the US employers. She urged the workers to keep the Jamaican flag flying high as ambassadors of their country.

A unique seasonal tourist resort destination, Michigan utilises Jamaican workers from April to the first week in November each year. The last time a Jamaican ministerial delegation visited, it was led by former Prime Minister Portia Simpson Miller, 20 years ago when she was minister of labour.