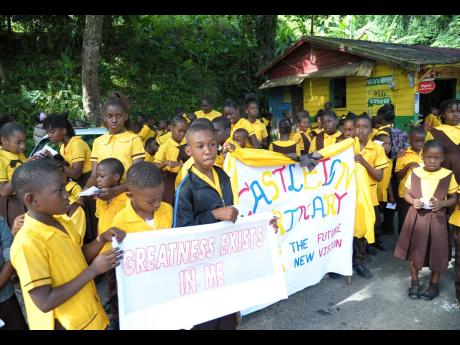 Parental involvement is touted by experts as one of the key prongs for success in the learning process and above-average academic performance.

Castleton Primary School, an institution nestled in the hills of St Mary with a student population of 129, has embraced a new way of thinking and approach to garnering parental involvement.

As evidence of this, the school has launched a new vision statement and led a symbolic march through the community to share this new vision with parents and community members alike.

The school credits this new-found energy and approach to the impact of JMMB Joan Duncan Foundation’s ‘Conversations for Greatness’ programme.

Patricia White, principal of Castleton Primary, admits that even though the school has a small population, educators are challenged by the low level of parental involvement, illustrated by the low attendance of parents at school-related events, parent-teacher meetings, and lack of involvement to ensure completion of homework. White revealed that this long-standing challenge is not unique to Castleton, having had a similar experience at a previous school where she was principal.

However, she is determined to change this status quo. Since being introduced to the JMMB Joan Duncan Foundation-led Conversations for Greatness), in July 2018, the school received what could be deemed as a ‘flicker of hope’.

The Conversations for Greatness programme began with the 23 members of staff engaging in a three-part series of transformational conversations led by trained facilitator Christine Staple-Ebanks. Following the workshop, facilitators were assigned to the school to act as direct accountability partners and provide one-on-one coaching to the principal, during the nine-month-long sustainability period.

The school is now boasting several improvements in its infrastructure and interpersonal dynamics, and is in a better position to provide a more conducive learning environment.

“The milestones thus far are significant for the school, as they are in line with the new mission of the school to be ‘... a friendly, safe, secured, healthy and modern environment committed to prepare holistic students who will think critically and perform at their highest level, especially in literacy and numeracy … ,” Staple-Ebanks said.

“After completing Conversations for Greatness, the staff decided that if for [any] reason parents are not or cannot come to school, they will go to the parents. Our mandate is to engage and energise the parents and community members of Castleton, and to instil pride and support for the benefit of the children,” she added.