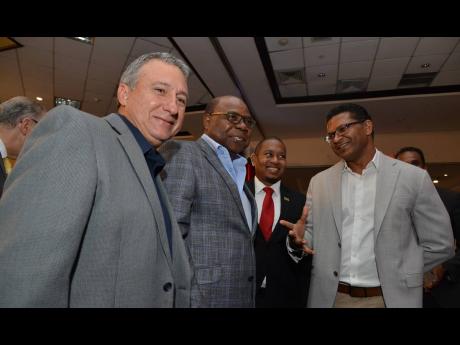 Kenyon Hemans/Photographer
Tourism Minister Edmund Bartlett (second left) shares a moment with Floyd Green (second right), minister of state in the Ministry of Industry, Commerce and Agriculture; Richard Pandohie (right), newly elected president of the JMEA; and Metry Seaga, immediate past JMEA president and chairman of the Manufacturing Technical Working Group, at the launch of the fifth staging of the Christmas in July at The Jamaica Pegasus hotel yesterday.

A leading businessman is warning Jamaica to be on guard against a similar local occurrence of the economic nightmare unfolding in regional neighbour Venezuela.

Richard Pandohie, president of the Jamaica Manufacturers and Exporters' Association (JMEA), used yesterday’s opening ceremony of the Christmas in July trade show at The Jamaica Pegasus hotel in New Kingston to remind his audience that despite its economic woes, the "Venezuela of today that we all read about in shock" has natural resources and abundant wealth.

"After all, that country is blessed with so much natural resources and has so much wealth, what would have gone wrong? What went wrong was that there was inequity in their society, and disparity between the haves and the have-nots was too wide.

“The majority of people then chose a populism path that they felt would make it more equitable for them. Fast-forward to today, and you can see my fear of what could potentially happen to our country without proper collaboration. To avoid this slippery slope, everyone in this room and across the local industry will have to accept that Jamaica is our business, whether you’re a manufacturer, exporter, entertainer, hotelier or farmer, Jamaica is where we have all planted our roots, made significant investment and are raising our families," the JMEA boss said.

“Jamaica is our shared enterprise and, like any enterprise, collaboration is key. Even with our wonderful, collaborative events such as Christmas in July, we still have a long way to go when it comes to achieving true cooperation across the linkages network. The Buy Jamaica agenda is expanding and that is something that the Jamaica Manufacturers and Exporters' Association is truly proud of, but we are not happy,” he said.

Data hoarding – the unwillingness to share useful information which could lead to greater success and business collaboration – Pandohie admitted, is one way that business operators are stifling their own potential progress.

“We are not achieving anywhere near our full potential, and one of our biggest setbacks is the collection or sharing of data. We live in a time where data is a big deal. Companies, business support organisations and governments across the world can analyse a variety of information which can provide new insights to make better and faster decisions and decide where to allocate scarce resources, but we can’t have data analytics if less than three per cent of the data is coming in,” he noted.

“Companies are holding out on providing information because they fear the tax authorities are going to come after them, or their competitor is going to get access to the data, even when the legislation governing statistics collecting entity absolutely protects them or anyone from the risk that they fear. This mindset is crippling our manufacturing sector and ultimately the growth possibilities of our country,” Pandohie declared.

“In total, 30 correspondents receive contracts valued at over $16 million," Bartlett said. “Unfortunately, many of the Christmas in July exhibitors, while reaping the benefits of the exposure and contracts from this event, were unwilling to share information on the contracts they received. This is a pity as it would have allowed my ministry and the public to gauge the true success of the linkages initiative.”