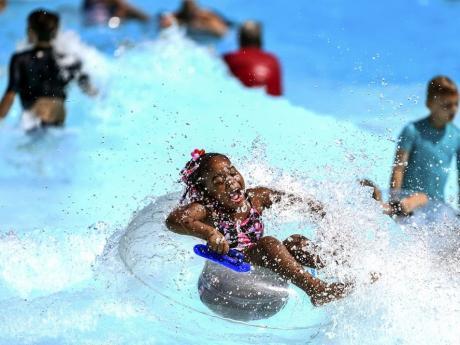 Destinee Lucas, 6, of Aliquippa, Pennsylvania, rides a wave at the pool at Settlers Cabin Park on Thursday, ahead of a record-breaking heatwave now roasting much of the US. (Alexandra Wimley/Pittsburgh Post-Gazette via AP)

New York City has declared a local emergency as extremely hot weather begins to hit most of the United States (US).

In addition, Mayor of New York City Bill de Blasio has announced that 500 “cooling centres” will be opened across the city.

Similar measures have been announced in Detroit and other cities as meteorologists warn that temperatures are expected to peak over the weekend.

According to reports, the heatwave could affect approximately 200 million people in major cities like New York, Washington and Boston, along the East Coast, as well as the Midwest region and parts of Canada.

The National Weather Service in the US has warned that in some places, temperatures will be close to or exceed 100 degrees.

de Blasio, in a video message posted on Twitter, said the local emergency was declared due to the extreme heat in the city.

He urged New Yorkers to take the threat seriously and stay hydrated.

In Canada, heat warnings have been issued for parts of the provinces of Quebec, Ontario and Nova Scotia.

Canadian meteorologists say with the humidity daytime temperatures in Toronto could feel like 104 degrees most of the weekend.