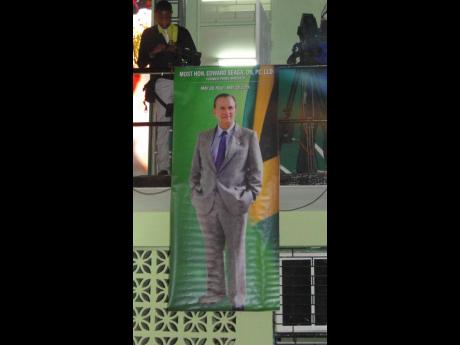 Paul H. Williams
A poster with the image of former prime minister, Edward Seaga, emblazoned on it, at the recent Revival table set up in his honour inside the community centre in Tivoli Gardens.

Artist and sculptor, the late Mallica Reynolds was born in St Catherine on the 10th of February, 1911. When he was 12, he had a religious experience which left him going by the name of Kapo. At age 16, he said he had a vision, and became a preacher.

Shortly after, the preacherman moved to the Corporate Area where he founded a Zion Revival church, St Michael’s Revival Apostolic Tabernacle where, until his death in February 1989, he was the patriarchal bishop. He eventuality became the leader of the Zion Revivalist movement.

Yet, Kapo was more than an ordinary Revivalist; he was a painter and sculptor who became widely known as a member of the Jamaican intuitive artist movement, a group of artisans who were not formally trained, but whose works were powerful and provocative, and attracted diverse sets of patrons.

Kapo’s pieces were heavily influenced by his religious beliefs. They depicted Zion Revival ceremonies, music and dance, and he evolved into one of the greatest Jamaican intuitives, known the world over. He had exhibited internationally, six times in the United States, between 1953 and 1982.

One of his paintings, ‘Shining the Spring’, was given by the Jamaican Government as a wedding gift to Prince Charles and Lady Diana. In 1983, he was the first artist to have an exclusive exhibition at the National Gallery of Jamaica. He was bestowed with the honour of the Order of Distinction and was a recipient of the Norman Manley Award for Excellence in the Arts and a Musgrave Gold Medal. But before the honours and the accolades, Kapo had met a man from the other side of the social fence, the Lebanese-Jamaican Harvard graduate, anthropologist, Edward Phillip George Seaga, who was a Revival scholar/researcher at the time, doing participatory observation in west Kingston.

“In Trench Town I found Malachi (sic) Reynolds, ‘Kapo’, the Zion Captain and the most prominent of Revivalists in Jamaica, but he was something else; he sculpted and painted, not in the contemporary, but African sense,” Seaga writes in A Life of A Cultural Mission, published in Jamaica Journal Vol 32 Nos 1-2.

He continues, “Kapo gave me his first piece of sculpture carved with a penknife, unbelievably from lignum Vitae (a very hard wood). After completing that impossible task, I advised him to switch to cedar. He left for me … his rocking chair on which I had sat for the many hours of our interviews over several months.”

While Seaga was a defender and patron of Kapo’s art, Kapo was one of Seaga’s sources. From Kapo he had learnt much about the ethos, sensibilities and nuances of Revivalism. Former Gleaner columnist, the late Ian Boyne, sums up Seaga’s attitude to Kapo’s religion and art in an In Focus article captioned ‘Eddie Seaga: Born Jamaican’ , published in The Sunday Gleaner of July 29, 2012, thus:

“When the police were harassing Mallica ‘Kapo’ Reynolds, confiscating his works of art and locking up other Revivalists as obeah men, it was Seaga who took to the press to blast them and make the police ease up on black people exercising their freedom of religion. Socialists and communists were not doing that.”

In his article, Seaga says he was just in time to rescue the Larry Wirth collection of Kapo’s “large and very valuable works” when it was about to be sold to an overseas buyer. He purchased them for the National Gallery, “where they are displayed in majestic prominence as the most eminent example of Mother Africa in Jamaica’s painting and sculpture”.

Seaga’s relationship with Kapo was a great friendship, which some people could not fathom, but it was Seaga’s intention to make “the work of Kapo prominent to the rest of Jamaica”. And he was also hell-bent on keeping Revivalism in the limelight to the extent where he did the unimaginable, setting up a Revival table at Jamaica House.

Seaga and Kapo complemented each other; one was a Revivalist, the other a Revivalist scholar, the practitioner and the researcher. They are both buried in National Heroes Park where the interviews perhaps have been resumed.