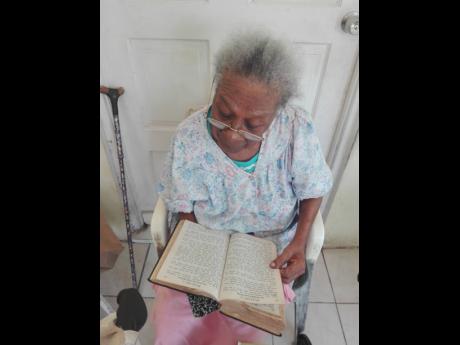 For the last 67 years, Bullards, Clarendon, has been home to 86-year-old Sylvia Paisley.

Paisley, affectionately called ‘Mama Liz’ by members of the community, is regarded as a great mother and a devoted Christian. In fact, she has been a full communicant member of the Bullards Church of Christ congregation for 44 years.

When The Gleaner visited her home, her Bibles were noticeably placed atop the walker she uses for daily physical support around her home.

grandmother to more than 30

Mama Liz said she gave birth to eight children, but unfortunately, four have predeceased her– three in adulthood and one as an infant. Her family said Paisley is grandmother to more than 30 grandchildren, but said they have lost count of the number of great-grandchildren. Mama Liz said in her youthful years, she worked as a domestic helper and did other odd jobs to care for her children. “I did have a little shop, but before me have the little shop, I always work out, do little domestic work. I also planted a little this or that, little ketch crop when me in a me health, in a me younger days. Me go Springfield, Vere, all ‘bout.” Mama Liz noted that she had no challenges raising her children as they were very obedient and well behaved. “Them very obedient to me, all a them,” she said.

Paisley is enthused when telling people about God and the church. She said, “Without the Lord, we couldn’t live, a him died on Calvary’s Cross for us, so we have to pay him back something. Him wake me up in the morning and give me tea and something to eat,” she told The Gleaner.

Mama Liz has been hailed for her caring nature to children that are not biologically her own. She told The Gleaner that she loves every child equally and treats them well.

“Me always take people baby like my baby. They used to say me might not have any for myself because me love baby so. Me buy cloth and make baby clothes. Is girl baby me love and is six boys me get,” she told The Gleaner.

Ruth-Ann, Mama Liz’s granddaughter, described her as “very nice grandmother” who loves church. “Whenever she can’t go to church, she can’t live in peace.” Franklin ‘Pipie’ Paisley, son of the elder Paisley, described his mother as a great mom who is very trustworthy. Mama Liz told The Gleaner that her favourite song is number 496 from her Hymn Book, This world is not my own.

During the interview with The Gleaner, the community mother requested her Hymn Book and began carolling sweet notes of her favourite song. She said, “Me tell all me children say when me dead, them must sing this song.” Mama Liz added that her favourite biblical words are documented in Psalms 33, “Rejoice in the Lord, O you righteous! For praise from the upright is beautiful.”