From cabin to coffee factory (Part I) … The Arthur A. McGowan story 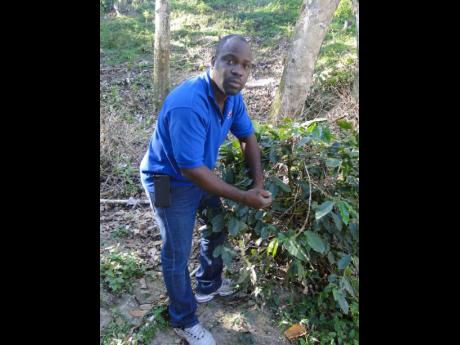 Paul H Williams
Arthur A. McGowan tending to a coffee tree on his farm in Chatsworth, rural St Andrew.

Arthur A. McGowan spent his childhood days in the mountainous district of Sugarloaf in the Gordon Town region of east rural St Andrew, from where the city of Kingston can be seen from lofty heights.

It was a hard-knock life for the family of ‘kind’ farmer parents and 10 siblings. He would walk about five miles on “donkey tracks” to reach the main road to get to school in the mornings, after waking up from about 4 o’clock to take care of goats, and sometimes a donkey.

Even when McGowan left Gordon Town All-Age School to attend Trench Town Comprehensive High School (TTCHS) all the way in west Kingston, the routine did not change. His sojourn at Trench Town, where he was an avid cricketer, he said, was a tough “life lesson”.

And while many youths at his age dreamed about professions such as law, medicine, teaching, business, etc, McGowan aspired to own a fleet of trucks.

“As a young youth, growing up in Sugarloaf, where there were no vehicles, we used to play trucks and buses with my little sisters,” he recalled.

By chance, while he was repeating grade 11 at Trench Town because he did not pass mathematics at Caribbean Examination Council, he was taught to tune and play the steel pan by Reuben Bernard. It took them about one month to make six drums, after which a band was formed.

McGowan, who knew nothing about music at the time, was to play the bass. He said that they were never taught music, but “swatted” the notes for each song they played. The first song he recalled ‘learning’ was Oh Donna, and TTCHS became the first school in Jamaica to have a steel band, which played at functions all over the country.

And it so happened that Bernard had a steel band performing at joints on the north coast. McGowan got a spot on the band, which played at all the major hotels from Negril to Portland, he said.

But somewhere along the line, McGowan’s family broke up when his father moved out of the family’s nine-apartment house to live at a place on the other side of the mountains called Chatsworth. Upon hearing what happened, he left to live with his father in a little board structure, which his father had built. McGowan would go to help his mother from time to time, but not to stay.

Yet fate was to deal him a severe blow, when his father was diagnosed with cancer about 1994-1995. He died in 1996. At the time, McGowan was still playing on the north coast, where things were not so bright, and he himself had become a father. His life was about to change.

At Chatsworth, there were some old coffee trees on his father’s land, and there was another in a flowerpot. The sight of them gave him an idea. He was going to start a coffee farm. An older brother supported the idea, and he made a decision to go full time into coffee farming, not knowing much about the industry. With the assistance from farmers with whom he had a community work partnership, he soon had four acres of coffee under cultivation.

McGowan said that he worked night and day planting coffee, and when it seemed like it was about to take off, relatives from his father’s side, some residing overseas, intervened, objecting to his establishing his farm on family land. But he kept planting.

After two years of planting, about 2001, McGowan delivered his first boxes of coffee to a well-known buyer. Expansion was also on his mind, but he could not afford fertilisers, so he had to make personal sacrifices, such as eating canned mackerel instead of chicken on Sundays.

Then, land space, too, became scarce. He had no money to buy, so he thought of clearing government land at Flamstead, on the other side of the hills. It was a gamble, he said, which other people were engaged in. He cleared two acres, arguing that should Forestry Department attempt to stop him, he would get help from other stakeholders.

Every Thursday he would leave Chatsworth for his “coffee bush” in Flamstead, working night and day before returning home Sunday morning.

“The commitment came from pride from I was growing up, love for farming, the love for nature, and the passion for success,” he told The Sunday Gleaner.

And McGowan said that he was not doing it for himself alone, but also for other people who were struggling. He was still not seeing the fruits of his labour, but not being easily scared, he had high hopes – which were to literally go up in fire and smoke.