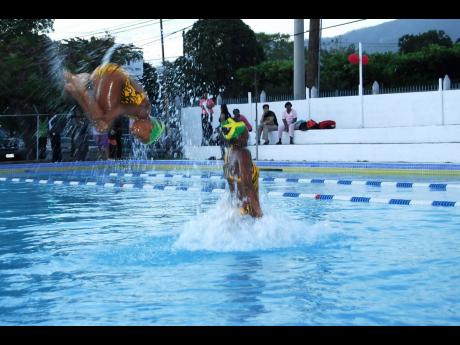 File
The YMCA in St Andrew is one of the few facilities in Jamaica where persons can learn how to swim.

Although Jamaica is often touted as the land of wood and water, national coordinator of the Jamaica Life Saving Society, Norman Fraser, said the shortage of facilities for persons to learn how to swim has made it difficult for many to qualify to become lifeguards.

“When 100 people come out for lifeguard training, within the first two days, we can lose up to 60 per cent, because they may have the subjects [academics], but they can’t swim, or they can swim, but don’t have the academics,” he told The Sunday Gleaner.

“Some of them come out thinking, ‘ yeah man, this a easy thing, I can fake my way through’. The day they have to swim all the way out and back, that’s the day they fail.”

He laments the fact that although the need for lifeguards is greatest in rural Jamaica, given that most of the hotels are outside of Kingston and St Andrew, most of the facilities established to teach swimming are in the Corporate Area.

He also pointed out that even though children in rural Jamaica have access to rivers, they would need someone to teach them how to swim.

ONE NEEDED IN EVERY PARISH

The popular places for training in Kingston are the National Stadium pool, the Young Men’s Christian Association [YMCA], the University of the West Indies and the University of Technology. Pools are also operated by several private institutions that offer swimming lessons to children.

Fraser’s concerns are shared by director of the Blue Marlin Swim Club, Rosemarie Logan, who is one of about four swimming pool operators in western Jamaica.

“We don’t have a facility in every parish with proper provisions like what they have in Kingston. Every parish should have something like a YMCA, which is supposed to be set up by the government,” she said, noting that it is a worthwhile investment, given the multiple benefits of swimming.

“I grew up in Kingston, swimming was mandatory. In Kingston, nearly every high school had a pool,” said Logan, who was taught swimming as a student at the YMCA and later the Wolmer’s Girls’ School.

She also lamented that, “The new schools they are building don’t even have recreational areas.”