Religion & Culture | An inside look at the refugee crisis 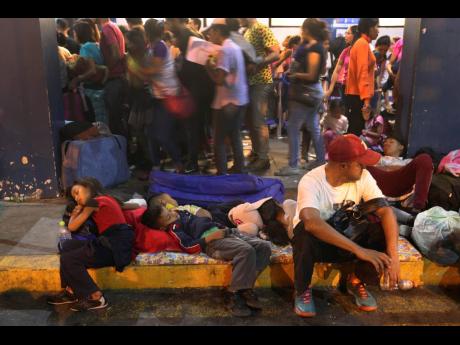 Martin Mejia
Venezuelan migrants rest while another group stands in line to enter am immigration office in Tumbes, Peru, recently. Venezuelan citizens are rushing to enter Peru before the implementation of new entry requirements on migrants fleeing the crisis-wracked South American nation.

Sunita Maharaj is an educator and humanitarian. Her appointment as a Global Goodwill Ambassador of Trinidad and Tobago has put her at the fore of a phenomenon sweeping Europe and the Americas. Political and economic upheaval across the globe has ignited a surge in refugees. Migrants from Northern Africa, braving perilous conditions, have made their way to Israel and Western Europe.

The same holds true for migrants making the arduous trek from Central America to the United States border. Closer to home is a looming civil war ignited by an anaemic economy that has driven thousands of Venezuelans to neighbouring Trinidad.

Over the years, Maharaj has gained in-depth knowledge of this global crisis, having managed learning centres for refugee children in many countries. For the safety and protection of refugee children, some of her work is guarded.

During my recent visit to Trinidad, I spoke to Maharaj.

She offered some insight into the dynamics of this global crisis:

Q. Tell us a little about your background.

I have worked with people from all walks of life, from diplomats to refugees. I took my current position excited about the opportunity to design and implement programmes and curricula that utilised my experience in teaching English and Spanish as second languages. Over time, it evolved into a much bigger project that has allowed me to dabble in the international development sector.

Q. Was there a defining moment that led you to activism?

If you ask about a defining moment, I think it was many years ago when a colleague of mine expressed her utter distress that Haitian refugee children living in the Dominican Republic were not allowed into schools. I think it shocked me. I could not quite comprehend the rationale behind such a decision.

They struggle with rejection from persons in the host country. They often feel unwelcome and misunderstood and many of them share feelings of worthlessness, as they now become dependent on others to assist them in providing basic needs for their families, unable to work in the fields and professions they did back in their home countries.

In Trinidad & Tobago, children of refugees and asylum seekers struggle with lack of structure and often long for the joy of being in school, watching local children in uniforms go to school each day. In a practical sense, they will fall behind their peers of the same age, as they miss the content covered in the traditional school setting, often for a sustained period.

Q. What is unique about today’s refugee crisis, and what do you think is the appropriate response?

From my perspective, the only real difference is the magnitude of the various crises worldwide, considering that there are close to 70 million people that are forced to flee their homes as of 2019.

Additionally, perhaps having refugees being officially called refugees, and fleeing into the Caribbean islands like Trinidad & Tobago is a fairly newer concept.

One of the core principles of humanitarian aid and intervention is to ‘Do no harm’. I think that any organisation that adheres to this principle, and that works to respect the culture of the population in need, can assist in addressing the problems that individuals face when coming to a new place.

Practically, there needs to be a greater understanding of what is required to make their transition smooth, including the provision of basic needs such as food, potable water and shelter. I also think that there needs to be greater sensitisation of the host population. Governments need to ensure that their citizens feel safe and comfortable with new arrivals but are also welcoming and kind, considering that a crisis can occur in any country and any one of us may be forced to flee tomorrow.

Q. How can non-governmental organizations (NGOs), in particular, make a difference?

Of course, the UNHCR and UNICEF are here as well, and they support many of the local NGOs. Organisations like these often look for altruistic persons who are passionate about putting professional skills to use in a humanitarian context. Such individuals are driven, culturally and emotionally sensitive and intelligent, and excel at managing stress.

Q. The refugee crisis has worsened due to the political climate in Honduras and now Venezuela. Can you speak about this from a humanitarian perspective?

People are dying due to lack of the most basic medications for manageable diseases such as diabetes and hypertension. These are some of the reasons why so many people are fleeing, and these images should strike us to take action and be helpful to those who could not think of a better option than to leave.

Of course, I am not saying that we should interfere with the internal politics of any country; however, we have a moral, ethical and human responsibility to extend a helping hand to others in need.

Q. We know that politics and economics play key roles in resolving this problem. Where does education fit into the equation?

Further, through education, we give them the tools to survive independently, no matter where they end up. Instead of systematically enabling a whole generation of children to be lost, creative changes to the current education system can create beneficial effects now and in the long-term for refugees/asylum-seekers and citizens. We can no longer pretend that refugees are not a huge part of our society. That must be acknowledged.

Q. Are you optimistic? Do you see some kind of resolution in the horizon?

Regarding the Venezuelan crisis and its impact on Trinidad and Tobago, I am cautiously optimistic there will be a positive outcome when locals feel more comfortable with the migrant population. I am hopeful that the innately generous nature of Trinbagonians will bring opportunities for refugee children and adults.

- Dr Glenville Ashby is the award-winning author of ‘Anam Cars: Your Soul Friend and Bridge to Enlightenment and Creativity’. Email feedback to columns@gleanerjm.com and glenvilleashby@gmail.com, or tweet@glenvilleashby