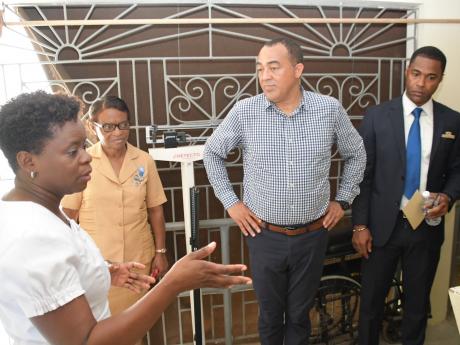 Minister of Health and Wellness, Dr Christopher Tufton, says the Government will ensure that the process of accountability and transparency is embedded in the Ministry’s Adopt-A-Clinic programme.

Addressing the official ceremony for the adoption of the George’s Plain Health Centre in Westmoreland last Thursday, Tufton said that “one of the things we will never want to happen is that we have people who are generous to give, but they do not see what their giving has resulted in”.

The George’s Plain Health Centre has been adopted by the Tyre Warehouse and will benefit from a three-year partnership with the company, which has committed $2.5 million to the project. The funds will be used to undertake infrastructure upgrades and other improvements at the centre.

Tufton pointed out that a major aspect of the adoption process is an annual report that will be generated to show how donations from businesses that adopt clinics are used.

“We have to keep the process credible and you (stakeholders) have to be a part of that process to ensure that it is credible, because, ultimately, all benefit. Otherwise, you are going to have bad relationships, and bad relationships end in separation,” he added.

Under the Adopt-A-Clinic programme, the Ministry has earmarked 100 health centres across the island for support from local and international persons, groups and corporate entities, with the aim of strengthening primary healthcare facilities.

The George’s Plain Health Centre is the third such facility to be adopted in Westmoreland, as the Petersfield and Lamb’s River Health Centres were also adopted. An estimated nine health centres across the island have been formally adopted, with approximately 20 more to be announced later this year.