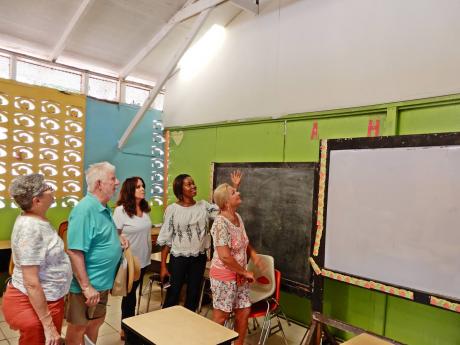 Carl Gilchrist
Principal Slean Harris (second right) shows the area where repairs were done to a classroom at Three Hills Primary School in Charles Town, St Mary. Others in the photo are (from left) Jane Saks, Gene Saks, Alex Ghisays and Darcy Fangman.

Principal of Three Hills Primary School in Charles Town, St Mary, Slean Harris, has commended the contributions of overseas sponsors who, along with Couples Tower Isle hotel, have effected repairs to several classrooms at the institution.

Gene and Jane Saks from Florida, United States (US), have hosted a fundraising golf tournament at Couples Resort since 2002 to fund several charity projects in Jamaica. Additionally, they also raise funds overseas through sponsorships, and also through the Rotary Club in Florida, to assist locally.

Assisting Three Hills Primary seemed to be special for the former teachers, as they sought help from education officials in the US to provide furniture and do repairs at the school.

Dozens of desks and chairs were provided for the students over time. Recently, repairs were done to extend the partitions between classrooms to the ceiling to enhance privacy which, in turn, enhances the teaching and learning experience.

The repairs, which cost $600,000, saw the Saks providing the majority of the funds, while a third of the amount was proceeds from the Couples golf tournament.

“I just want to say thanks to our sponsors overseas, through the efforts of Mr and Mrs Saks,” Harris told The Gleaner on Friday evening. “They had seen the need for the partition and have extended a helping hand that has really enhanced teaching and learning, which we observed in the last term.”

The Sakses visited the school recently, accompanied Darcy Fangman, who, along with husband Jim, were the first donors to the Saks’ fundraising efforts years ago, and Couples Resorts Group PR Director Alex Ghisays.

Jane Saks explained the reason for the repairs: “We noticed the walls between classrooms were only two-thirds of the way to the ceiling, that’s a terribly distracting learning environment which is going to keep the literacy rate from escalating. So we decided we’re going to have another Rotary Week, so this was another Rotary project where we raised money to reconstruct these walls all the way to the ceiling.”

They were satisfied with the work they saw.

Looking ahead to the new school year, Harris said that the school is in need of a canteen.

“We need a canteen building at this time,” she said. “We’re looking forward to making a proposal to the Ministry (of Education) and also the infrastructure that would be needed inside the building.”

Three Hills Primary School has a student population of 174 students, with seven teachers.