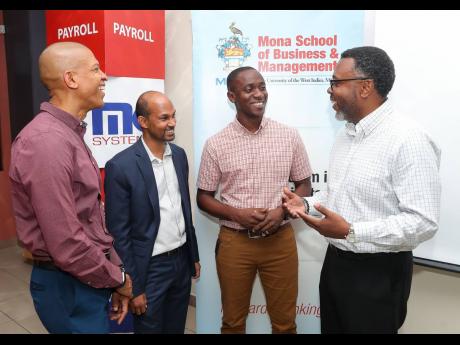 Students at the Mona School of Business and Management (MSBM) at The University of the West Indies were exposed to the importance of digital transformation to businesses, which was underscored as being critical for entrepreneurs, if they want to remain competitive and facilitate growth in their operations.

Dwayne Russell, general manager of MC Systems and a guest lecturer on the topic, said digital transformation can create tremendous value to businesses.

Citing some examples of successful digitally transformed companies, Russell noted that Google and Amazon were excellent case studies, as those companies contributed to a more integrated and expansive consumer experience.

“Amazon started out as a retailer of books online, and they were responding to the fact that some of us were no longer interested in going into bookstores. Therefore, they decided to publish books online and to see what the response would be,” he related.

Russell noted that Amazon used the same template to broaden its offerings and launched their technology-powered self-serve stores for quick on-the-go shopping, which has been successful worldwide.

Data, people and processes played a major role in the transformation of these organisations (Google and Amazon). The collection and analysis of data led to a shift in how they saw themselves and their customers, which ultimately guided the transformation into the businesses we now engage,” he explained.

Russell observed that, here in Jamaica, some of the areas that will need adjustments to facilitate digital transformation include: ICT infrastructure, regulations, business policies and business culture.

Expounding on the point of ‘culture’, Russell said, “One of the barriers to digital transformation was the business culture in Jamaica, whereby mandatory regulations still require certain validation with physical documents. In addition, despite the promotion of online and electronic banking, some Jamaicans still prefer to do basic transactions in branch, which is a culture that will take some time to change.”

However, he proposed that the following steps needed to be taken by local companies to initiate digital transformation.

They first need to digitise information, digitalise processes and functions, and then digitally transform the business and its strategy. In its implementation. Companies also need to get stakeholders buy-in; make information accessible within the organisation; build capacity and capability; and seek guidance and assistance from consultants who have specialised skills and experience in organisational change.

“For digital transformation to work, people must understand why is it that they are going through this process, and they should perceive value in embracing technology,” he advised.

The MSMB class, which is doing IT project management, was receptive to the presentation. Michelle Smith, one of the students who attended the lecture, said that the presentation was informative and timely and she noted that organisations needed to beupscaled to benefit from Industry 4.0.

“Going forward, as a result of the Fourth Industrial Revolution, organisations will have to come on board and transform digitally,” she said.

For Suzette Cox, another student, the lecture was relatable to her area of study, and it brought new perspectives on how she could address a project which she is working on.

“The timing was great, and he (Mr Russell) touched on many things that will spur us in writing our projects or documentation and how we start to look at the needs of the customer.

That was one of the things which was lacking in the projectwe were working on, as we were not thinking about the customer and, therefore, it was timely.”

MC Systems has been conducting a series of guest lectures at tertiary institutions with the objective to expose more students to different types of technology.

MC Systems is the technology company in the MCS Group, one of the holding companies in The Jamaica National Group.