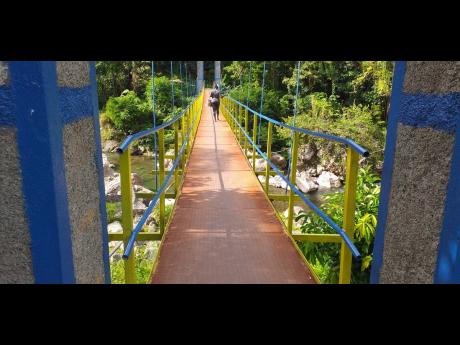 Photo by Gareth Davis Sr
A woman walks on the newly erected swing bridge as she makes her way from Comfort Castle to Cornwall Barracks in the Rio Grande Valley in Portland.

Ann-Marie Vaz says she has achieved her infrastructural targets set for her first 100 days in office as member of parliament (MP) for Eastern Portland.

Vaz, who found favour with electors during the April 4 by-election, told The Gleaner last week that although she doesn’t regard herself as a politician, she is learning to adapt and is cognisant of the need for transparency and accountability as an elected official.

She said that the process for project submission, coupled with government procurement policies and its allocation and approval, in most instances, leads to lengthy delays in getting initiatives off the ground, which sometimes frustrate residents.

“There are certain projects that I would want to get started in the shortest possible time,” commented Vaz. “However, there is a process to follow in Government, which can be frustrating, especially given the reality that there are emergency situations and the need is great. Nevertheless, I have to exercise patience and tolerance, so that when approved, I will be able to start and complete the work of the people ahead of schedule.”

Three months into the job, Vaz said that she is intent on delivering quality representation to her constituents.

“My heart is in this thing only for the benefit of the people, who deserve far better representation than they have been accustomed to. Under my leadership, East Portland will rise from its sleep and slumber to become the greenest, cleanest, and most developed constituency, wherein the lives and living condition of every resident will improve significantly,” Vaz said.

“The complete resurfacing of the Anchovy housing scheme road took place under my watch. The restoration of a swing bridge at Comfort Castle, which links the adjoining community of Cornwall Barracks, happened under my watch,” she said.

“The beautification of the coastline from Fort George to Allan Avenue, which has been retrofitted with specially designed concrete seating and tables for recreational purposes, happened under my watch. This particular area has become a major attraction for tourists and the local people. Rehabilitation of a bus stop at the transportation centre in Port Antonio happened under my watch. Rehabilitation of several roads, which was stopped during the lead-up to the by-election, is continuing. Several water projects aimed at providing potable water to several communities are also continuing,” she added.

According to the MP, the $20 million Constituency Development Fund (CDF) allocation to help with development projects is woefully insufficient as the needs are great.

“A large portion of my CDF will be pumped into education as I believe that it is the only vehicle that will get students out of poverty. And, therefore, the focus is providing financial assistance to those at primary, high school, and at university level. Already, I am offering scholarships valued at $300,000 to two university students from my first month’s pay as MP,” she said.

Vaz said she is embracing her new role as the people’s representative.

“This is entirely new to me, but I am learning. I am all about for the people and improving their lives and living conditions,” she told The Gleaner.