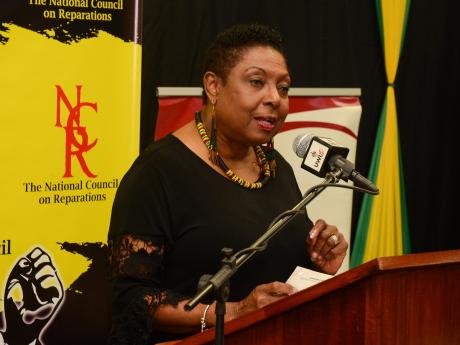 Jamaica is seeking to recover artefacts that are being held in other countries.

Culture Minister, Olivia Grange, explained that during early archaeological digs when Jamaica was still a British colony several artefacts were taken from the island.

Grange said among them was the Taíno piece called ‘bird man’ — which was carved from a solid piece of heavy and dark wood.

There is also ‘Boinayel’ the Rain Giver, an important god of the Taíno.

Grange, who was making her contribution to the Sectoral Debate in Parliament on Tuesday, said that these pieces, and many others that have also been identified, are with the British Museum.

“They are not even on display. They are priceless, they are significant to the story of Jamaica, and they belong to the people of Jamaica.  We are working — through the National Council on Reparations — to have them returned,” she said.

“At the same time, we have located several films — that tell the story of the development of our nation — in databases overseas. They belong to us and I have put a team to work along with Chappy St Juste on repatriating them,” Grange continued.