What did he buy?...Ruel Reid’s purchases with gov’t-issued credit card being probed 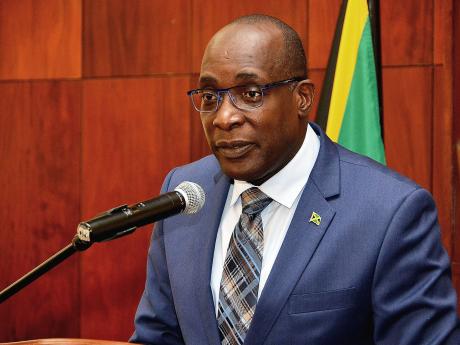 Research is now being conducted by the Education Ministry to determine whether the government-funded credit card issued to former minister Ruel Reid was used in breach of a directive from the Finance Ministry.

The disclosure was made by Dr Grace McLean, acting permanent secretary in the Ministry of Education, during the resumption of the post-Cabinet press conference at Jamaica House today.

“I will have to do my research and ensure that the information that I’m giving you is accurate because I would not have been the person who led that process,” McLean told journalists.

Karl Samuda, the Minister who has been overseeing the education ministry since Reid’s sudden resignation in March, revealed in Parliament yesterday that Reid was issued a credit card with a limit of US$3,800 that was “payable by the ministry upon use”.

According to Samuda, the card was “used for the purposes of gasoline, to cover some hotel charges, book charges and for some air travel-related charges”.

Further, she revealed that the Finance Ministry gave approval on September 29, 2016, for Reid to get the card.

The disclosures come against the backdrop of a circular issued by the Finance Ministry in September 2009 to permanent secretaries and heads of departments across government ministries, departments and agencies.

The circular lists the guideline that should be followed in the issuance of government-funded credit cards, what they can be used for and how expenditures should be monitored.

According to the document, ministries, departments and agencies are allowed to have a general credit card and an individual credit card.

A general credit card, it explained, should be used to pay authorised subscription and fees “payable only through the use of cards”; purchase of goods which adheres to the procurement rules; and payments for “any other authorised business transactions for which a card is the mode of payment requested by the vendor.”

In the case of individual credit cards, the circular said they should only be issued to authorised persons for official use and listed ministers of government, permanent secretaries, heads of departments, and chief executives officers as authorised persons.

It requires permanent secretaries to obtain written approval from the Financial Secretary for the acquisition of any government-funded credit card to be used by their ministry.