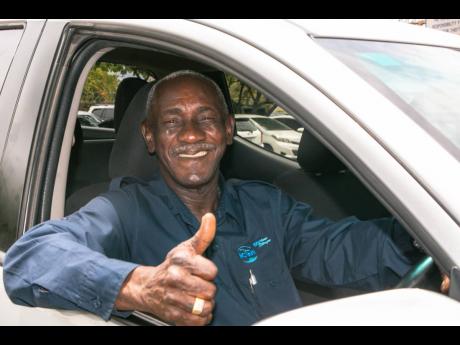 Chopi Brown is being hailed as one of the driving forces behind the Insurance Company of the West Indies (ICWI). This year marks 40 years since the St Elizabeth native became a driver with the company.

ICWI Chairman Dennis Lalor credits long-serving team members such as Brown with the success of the 50-year-old entity. “It is the commitment and perseverance of employees like Chopi that have contributed so greatly to our success. I am truly grateful,” said the dedicated businessman and philanthropist.

As a youngster, Brown never imagined that he would spend most of his professional career working with one single company, and neither was it his dream to become a professional driver, but as fate would have it, he started at ICWI as a driver in 1979, and four decades later, he remains dedicated to providing premium service.

Interestingly, Brown was recruited by Lalor when the businessman acquired the then Motor Owners Mutual Insurance Company, to which Brown was also employed as a driver. “When I started this job, I did not at any time believe I would have stayed for so many years, but here I am,” Brown said.

He noted that a good support system gave him the drive to be successful over the years. “Motivation from family, friends, co-workers, and a little from myself is what kept me going year after year,” he said.

Most people dream of travelling and exploring, but for Brown, driving is what he enjoys doing, and his job gives him the chance to do so. “I love my job because I get to do something that I like doing; I get to meet people and discover new places while I am working,” he said.

“I believe in always being ready, and growing up, I learnt how to be responsible and ready. Getting up in the early morning, I knew my responsibilities were to go catch water, move the goats … , and those things helped me in how I operate professionally,” he added.

The disciplined and dedicated Brown believes that his humble upbringing in Quick Step, St Elizabeth, along with training he received from the Jamaica Defence Force (JDF), has helped him tremendously in his professional development over the years.

Even though he has devoted much of his life to the leading motor and property insurance provider, Brown managed to serve in the JDF.

Being organised in conducting any type of work helps in being effective and allows things to run smoothly with minimal or no interruptions, and this is something that Brown agrees with wholeheartedly.

“I always prepare and plan my route before I leave to do my work. I always organise my packages in the order my route is planned because for me, preparation is key to getting the job done properly,” Brown explained.

He acknowledges that every employee has an important role to play in the success of the whole: “I do my best so that the company can continue to succeed.”