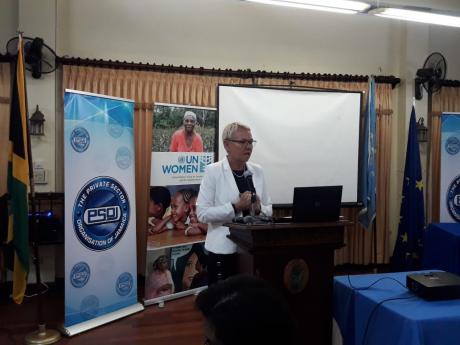 The European Union Ambassador to Jamaica says the recent tabling of the Sexual Harassment Bill in Parliament signals Jamaica's seriousness to improve the treatment of women in the society, especially the workplace.

According to Malgorzata Wasilewska, Jamaica is "moving in the right direction" when the bill is viewed in the context of the passage of the Disabilities Act and the recent review of laws which aims to protect vulnerable populations including women and those with disabilities.

"We know there is still much further to go but there have been important signs of progress which must be acknowledged," Wasilewska said this afternoon at a luncheon in St Andrew hosted by UN Women and the gender and disability affairs committee of the Private Sector Organisation of Jamaica (PSOJ).

The bill is to go before a joint-select committee of Parliament where the public will have a chance to contribute.

Meanwhile, in his remarks, PSOJ president, Howard Mitchell, said local businesses have to confront situations where unqualified men are being hired over qualified women.

"If you believe in your cause, you have to make some noise," he directed to advocates of gender equality, adding that he may become unpopular among his male colleagues for his rebuke.

Mitchell accepted that the PSOJ also has work to do.

Over 15% of the population or more than 500,000 persons were identified as disabled in the last census in Jamaica in 2011.

The EU is co-financing the "Win-Win: Gender Equality Means Good Business" being implemented in Jamaica and other Latin American states.

The rollout is being led by UN Women and the International Labour Organization.

It aims at promoting gender equality in the private sector.

The EU ambassador also announced that a new EURO 8-million programme, the Spotlight Initiative, is coming for Jamaica with a focus on family violence.