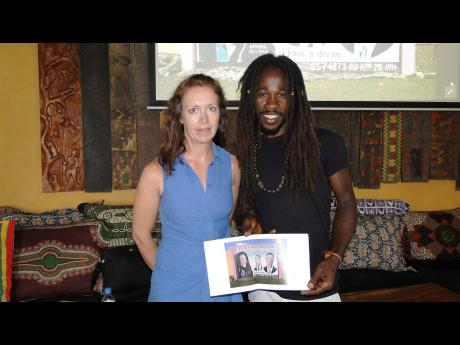 Paul Williams
United Kingston mural specialist Tracey Thorne (left) with one of the Jamaican artists, Katapul, whose works she has photographed for her documentary photography project called ‘Hand-painted Jamaica’.

Jamaican Arts Odyssey is one of the cultural programmes that Great Huts Resort in Boston, Portland, produces and hosts annually. The essence of the event is to expose visitors and residents to Jamaican artists and art through an odyssey, which involves visiting galleries and studios.

This year, for the ninth staging, held on July 6 and 7, the format changed to a series of seminars and workshops under the theme ‘The Healing Power of Art’, in collaboration with Bay View Eco-Resort, another Portland hospitality entity.

For the two days, participants were exposed to various ways in which art can be used to heal and remedy their emotional, psychological, mental, physical, dietary, and financial challenges. It was not about art for the sake of art itself. It was about the functionality of art, especially about how art can be used to turn your attention away from your problems.

This was heavily conveyed in the session on ‘healing with drawing and jewellery making’. Art will take your mind off your challenges, if you focus on it instead, relieving your stress. It helps you to reconnect with nature and yourself, restoring balance, and, of course providing you with the opportunity to make some money to abate the intensity of your financial challenges.

Among the presenters for this session were noted Portland artists and artisans Phillip ‘Ambokele’ Henry and his wife, Marcia Henry, who conducted painting workshops with adults, high-school students, and members of the Boston Beach Cultural Centre. The young participants were back the following day to immerse themselves in the ‘healing power of murals’ by way of the Sankofa mural-making workshop, led by another Portland artist-artisan, Lisa Hendricks.

The Sankofa bird is a very important Adinkra symbol of the Ashanti people of Ghana. It is depicted turning its head backwards, ruffling its tail feathers. It means “go back and fetch it”, whatever is left behind and/or forgotten, and use it to inform the present and the future.

After a brief lecture and demonstration on patterning, the participants drew patterns around a Sankofa bird that had already been outlined with cord. The finished work is expected to be mounted permanently in the Boston Beach Cultural Centre.

Murals were back in focus with ‘the healing benefits of murals’, under the tagline ‘Big tings a gwaan down di street’, when United Kingdom mural specialist Tracey Thorne discussed the power of painted walls for communities and “to transform places”. It was about how street art, develops communities and connects the people to their communities and themselves. She discussed her work in photographing hand-painted signs, street art, and graffiti in five Jamaican parishes. The photographs were part of an exhibition shown earlier this year in the UK.

The international presence at the Odyssey also came in the form of Lemuel ‘Life’ LaRoche, United States spoken-word artiste, teacher, and radio personality, who was most enlightening in his presentation on empowerment and positive expression through the game of chess. The session, held at Bay View Eco-Resort, also included performances from LaRoche himself and spoken-word artiste Jerome ‘Sage’ Butler and addresses from Mayor of Port Antonio Councillor Paul Thompson and veteran Jamaican actor Carl Bradshaw.

Music and food are part of the healing arsenal, so they were included in the programme as culinary artiste and executive chef at Café Africa, Steven Golding, and Richard Darby of the Manchioneal Cultural Group talked about the healing power of food, while ‘Yoga Warrior’ Anita Thomas demonstrated how to make healing superfood smoothies.

In retrospect, Dr Paul Rhodes, owner and designer of Great Huts, told Living, that “we are so proud of this meaningful and community-based 2019 staging that celebrated creativity with such unique programming. Portland holds a special artistic history and how excited we are as we prepare for another immersive arts celebration this November for our ninth Annual Cinema Paradise/Portie Film Festival.”