Pension plans closer to investing in wider range of assets 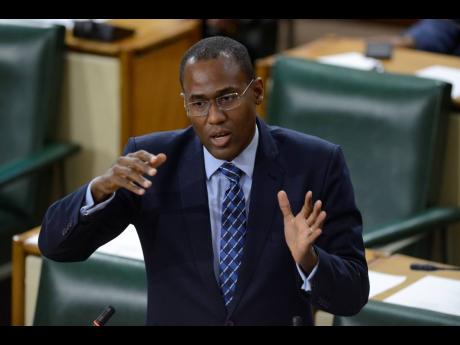 Regulatory amendments have been approved in the House of Representatives to broaden the range of permissible assets in which pension plans can invest and strengthen the legislative framework with respect to safeguarding the assets of pension plans.

The amendments to the Pensions (Superannuation Funds and Retirement Schemes) (Investment) (Amendment) Regulations, 2019 were moved by Finance and the Public Service Minister Dr Nigel Clarke and passed in the House on Tuesday.

“These amendments will provide higher return investment opportunities for pension funds while improving access to finance, deepening capital markets, and providing options for financing outside of the banking sector,” Clarke told members in the House.

The amendments also revise investment concentration limits and increase the amount that pension funds can invest in secured leases.

Said Clarke: “As we move into a new regime that’s underpinned and anchored by macroeconomic stability, where the Government’s appetite for debt is reduced and where pension funds have funds they need to invest, it is necessary to broaden the range of assets that pension funds can invest in. Furthermore, in this new era of low, stable, and predictable inflation, pension plans will need to be able to invest in higher-returning, longer term assets to be in a position to fund their pension liabilities. These amendments will allow for this.”

In his presentation, Clarke expressed gratitude to the Financial Services Commission, the Ministry of Finance’s financial regulatory division, and the Office of the Chief Parliamentary Counsel for the work done to get to this stage; to Jamaica’s multilateral partners CARTAC and the International Monetary Fund for technical assistance; and to the Pension Fund Industry Association and Opposition Spokesman on Finance Mark Golding for the comments provided during the process.

On the amendment’s passage in the Senate, pension plans will be permitted to invest in the following, among other assets:

(a) Bonds (ie, unsecured debt) issued by companies that have an investment grade rating from a recognised rating agency.

(b) Bonds (ie, unsecured debt) issued by companies listed on the Jamaica Stock Exchange. These companies are subject to mandatory accounting, disclosure and governance standards, and the amendment, correct a gross and long-standing anomaly through which pension plans could invest in equities of these listed companies, which are junior securities, but not unsecured debt issued by the same companies even though these have a senior claim on the assets of the company compared to the company’s equity securities.

(c) Equity or debt of private companies established under the laws of Jamaica, provided that in aggregate, these amounts do not exceed a maximum of five per cent of the assets of the pension fund. This will allow pension funds to invest in private equity and venture capital for the first time.

The Pensions (Superannuation Funds & Retirement Schemes) (Investment) (Amendment) Regulations, 2019, which are to be approved in the Senate at the next opportune sitting, can be found on the Houses of Parliament website.