All are invited to the party 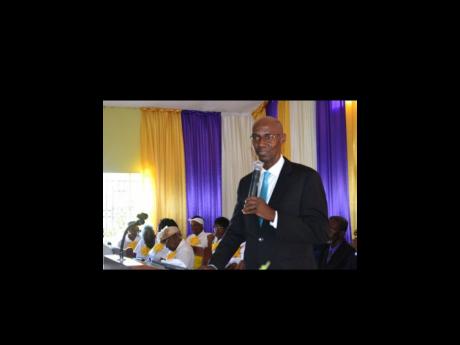 “ Seek ye the Lord while He may be found, call ye upon Him while He is near: Let the wicked forsake his way and the righteous man his thoughts: and let him return unto the Lord, and He will have mercy upon him; and to our God, for He will abundantly pardon.” Isaiah 55: 6-7.

It can be quite difficult to settle in with colleagues at a new job, find the right group of friends at school or be looked up to as someone worthy of being a part of a standard social group.

Some people spend their days trying to figure out what they can do to be accepted, and even fall into depression if their efforts prove futile.

But why force others to accept you when the Creator of all things and all people continuously calls you to be a part of his fold, says president of Jamaica Union of Seventh-day Adventists, Everett Brown.

“All are invited to the party. These words were written by the prophet Isaiah, and these words came to Isaiah from God to the people of God who were, at the time, enslaved in Egypt. Ancient Israel now had captives in Egypt. For 400 years they suffered under the terrible servitude of the Egyptians,” Brown stated, as he sought to bring home his point during his sermon at the Ramble Seventh-day Adventist Church recently.

“In Isaiah 55:1, it says ‘Come buy a drink with no money, come listen and live, come and experience an everlasting covenant and God’s steadfast love. Come and be glorified, come and find the Lord, come and receive the Lord’s mercy’…”

Brown said the people of Israel heard that God had abandoned them. They were hopeless, but the message that God shared with Isaiah, and he in turn shared with the people, said He would provide them with all that they needed.

“He said that their situation would not get worse, as He established His covenant with them. You are in slavery, and you are being promised liberation and God’s abundant blessing. God is going to glorify you and make you extraordinary.”

He said God’s promise was not just for the Jews, but also for every single person.

“Jews weren’t the only ones that were going to benefit from God’s special favour. This invitation was inclusive to all nations, all peoples; even persons who do not know God. God has His people and they are everywhere. He says, ‘Other sheep I have, other nations I have which are not of this nation. Them too I will bring and they will become one nation’.”

Is there a similar message given to the people of the world today? Brown says yes.

“Come everyone who thirsts to the waters, God is extending an invitation to you, to become nationals and universals. Come to the party: the invitation is extended to everyone who hungers and thirsts for righteousness.”

He encouraged those present to remove self and think and look only to Jesus.

“One of these days, there is going to be a grand reunion in heaven, there will be a great celebration. Good will triumph over evil, righteousness over unrighteousness, truth over lies, light over darkness, Jesus over Satan, life over death. We are going to triumph. God must be acknowledged as the authentic source of power.”