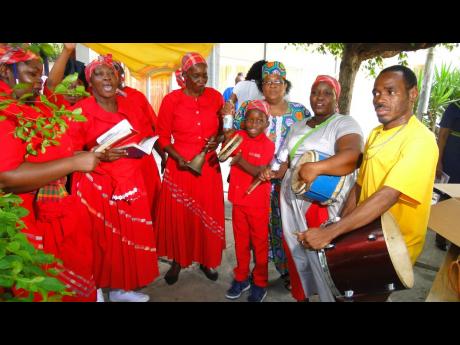 The familiar sounds of Revival singing and drumming wafted on the wings of the sea breeze coming from Kingston Harbour on Monday, June 10, as the African Caribbean Institute of Jamaica/Jamaica Memory Bank (ACIJ/JMB), in collaboration with the Tourism Product Development Company (TPDCo) Ltd, hosted a Revival tribute to former Prime Minister Edward Seaga in Orange Park at the corner of Ocean Boulevard and Orange Street, downtown Kingston.

In speaking to The Gleaner about the lunchtime event, Bernard Jankee, director, ACIJ/JMB, said, “The role of the African Caribbean Institute of Jamaica/Jamaica Memory Bank is to preserve and create awareness of African and Caribbean cultural retentions in Jamaica. Revivalism is an African retention, and Mr Seaga, as a sociologist, did extensive research in this area. In recognition of his work in promoting knowledge of Revivalism in Jamaica, the ACIJ/JMB, in collaboration with TPDCo, staged the Revival tribute in an effort to continue to transmit this part of our heritage while honouring Mr Seaga’s legacy.”

The ACIJ/JMB is a division of the Institute of Jamaica, an agency of the Ministry of Culture, Gender, Entertainment and Sport, and was one of the places Seaga went to learn about Revivalism.

“In particular, the African Caribbean Institute of Jamaica led me to many unknown areas of African retentions which I gleaned from its own outstanding resource base,” Seaga writes in an article called ‘A life on a cultural mission’ published in Jamaica Journal Vol 32, No.s 1-2, in August 2009. Incidentally, Seaga established Jamaica Journal as a subsidiary of the Institute of Jamaica, in his capacity as minister of development and welfare.

Seaga was not only a Revivalism scholar/researcher; he was also a participant in Revival sessions and rituals. Thus, the tribute took the form of a Revival service with a table, prayers, worship, songs, and dancing. It was led by members of the Mount Carmel Revival Mission Church, located at 10 Regent Street, Denham Town.

One of its members, who said she travelled from Canada, compared Seaga to the biblical King Solomon. She said, “A coming all the way from Canada to give tribute to this man. This man life has touched many people, small and great, rich and poor. This man has done so much for his people, he brings me in the mind of Solomon.”

And for those who were looking on and did not understand the meaning of the ceremonial items (including a big bell) on the Revival table, overseer Dian Gooden took the opportunity to explain and clarify the symbolism of each. She also briefly explained the nuanced differences between Pocomania and Revivalism, both of which came out of the Great Revival of 1860/61.

The session ended with the breaking and eating of the big duck bread that sat at the centre of the Revival table. It represented the flesh of Jesus Christ and was entirely devoured quickly. For some, that was lunch.

Shortly after, the gathering dispersed, perhaps to turn up again at the grand Revival table set up in the community centre at Tivoli Gardens on Wednesday, June 19. People from all walks of life, including members of Seaga’s family, Culture Minister Olivia Grange, and Local Government Minister Desmond McKenzie, spent several hours humming, singing, dancing, and trumping around a two-piece revival table.

In Seaga’s life, Revivalism was an element that he studied, participated in, and embraced.