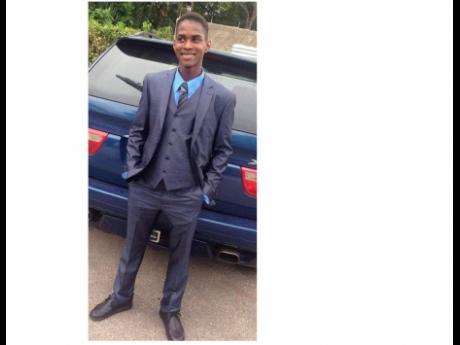 From roaming the streets, bouncing around, sleeping on strangers’ verandas, mixing with the wrong crowd and being disrespectful to his mother, he is now a mentor to other young people.

McLeod, who hails from Denbigh, Clarendon, is a professional welder and owner of Emanuel Grills and Gates. A youth mentor at Stars of Hope Outreach, he urges youth weekly to not allow their past to determine their future.

No one can relate to that more than McLeod himself, as he recalls how life got rocky for him after he could no longer live with his grandmother. He admits to giving a lot of trouble.

At age 14, he reconnected with his mother, whom he hadn’t seen for years, and went to live with her.

“I disrespected my mother all the time and she, in turn, would call me worthless and cruff, all the negative words you could find,” he said, adding that he had no idea why he was behaving the way he did.

It was a blessing for McLeod when an outreach by the Voice Of Victory Apostolic Ministry came to his community at the Four Paths Community Centre and hosted a service.

“I got baptised on the third night and started going to church. My mom was financially challenged, we lived in a rented house ...,” he said.

Eventually, his mother got notice to quit the premises and she went to live with a friend, taking two of her children and sending McLeod to live elsewhere. McLeod eventually ended up on the streets and started to move with the wrong crowd.

An incident that stood out in his mind is sleeping on a stranger’s veranda, in Bushy Park, Clarendon, and being unable to sleep. He paced restlessly around in the yard, resulting in a concerned neighbour calling the police.

He said he saw four police vehicles drove up, trying to alert them to his presence, he stood up and said ‘sir’.

“That night I saw my life flashed before my eyes, the policeman turned to me so fast and squeezed the trigger of his gun, but nothing happened. I only can now say wow, that was a night!”

His life was completely turned around a few days later as he went to look mangoes in the same yard and saw a young man welding. He asked if he could work with him and was told if he was serious he could.

“So I started going and he found out that I was homeless, so he said I should come stay at his house and learn the trade. I bless God for Oral Salmon, business owner of Elegant Grills and Gates,” he said in gratitude.

From there, McLeod’s life went uphill as he worked as an apprentice, eventually learning the trade.

He eventually hooked up with the church body that held the outreach in his community and started Bible study. It was then he realised he was dealing with pent-up anger and rage, which he took out on his mother.

His pastor Ann Marie Richards, and her husband, Overseer Elricka Richards, taught him how to get rid of that bitterness by just choosing to forgive.

Today, he has put his past behind him and says he is a loving son to his parents, and they love him too!