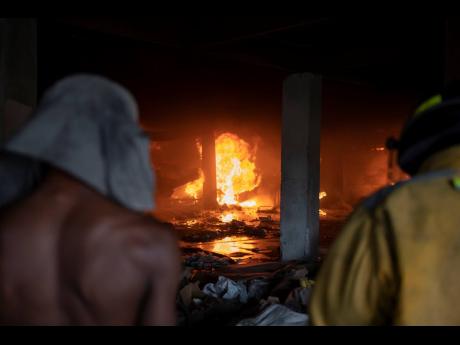 Gladstone Taylor
First-responder incidents include fire, drowning, suicide or other crises in which young children have either been killed or severely traumatised.

The last three weeks have been filled with blame and frustration for Cassandra Brown and her relatives, since her 12-month-old son was killed in a fire that razed their home on Bay Farm Road, St Andrew.

The tragedy is among the latest in what the Child Protection and Family Services Agency (CPFSA) cited as an increase in the number of first-responder incidents to which its officers have been deployed this year.

First-responder incidents include fire, drowning, suicide, or other crises in which young children have either been killed or severely traumatised.

These include the drowning of three children, the fire deaths of three others, and the murder of four youth, including a teenage girl, who was killed inside a Portmore house with her boyfriend.

One-year-old Neymar Facey was among the latest victims. He was reportedly burned to death in his sleep on July 9, when another child from nearby premises lit a sponge in his house.

His mother, Cassandra Brown, had left him with his teenage sister to purchase dinner at a nearby shop.

Her daughter, however, was reportedly next door when the fire started, and could not rescue her brother in time.

PERPETRATOR’s MOM ON THE RUN

Twenty-six people lost their homes in the blaze, and the mother of the youngster who lit the fire has reportedly fled the area after residents started dishing out blame for their loss.

“Undoubtedly, such traumatic incidents render these children and their families extremely vulnerable and in need of immediate assistance,” said a spokesperson from the CPFSA, noting that for each incident, it dispatches a first-responder team, made up of investigators, children’s officers, and counsellors.

“Affected families typically receive initial counselling and social support as deemed appropriate, followed by other kinds of intervention. These are all in an effort to restore normality to their lives and leave them satisfied by and confident in the child-protection sector.”

Last week, as Brown and relatives cried openly in a CPFSA counselling session, counsellors tried to free them of the blame they placed on her teenage daughter and the mother of the young boy who started the fire.

“She (daughter) feels really bad, and plus, sometimes I blame her. But that’s what they are telling me not to do because she is going to have it on her head. But me nuh know, me just a ask Father God why,” the 38-year-old mother, who lost the son she had prayed for, told The Sunday Gleaner.

“It is not like say is idle me go idle, is shop me go fi go buy food to cook for them. But is true me baby fall asleep why me beg me daughter fi give an eye. And is like me feel a vibe ’cause me beg har, ‘please’.”

Robert Williams, regional director for the South East Region at the CPFSA, said that while many parents and relatives may be going through various emotions, it doesn’t help the families to cast blame on each other.

“In the normal grieving process, there is a stage called blaming. So you lose a child and get angry and want to blame somebody, especially in these circumstances. But that type of blaming is not healthy, and it actually hinders the grieving process. So what we try to do is to counsel parents and help them to try to look at the situation a different way,” said Williams.

CPFSA CASES SINCE START OF YEAR

Incidents responded to by the CPFSA First-Responder Programme since January 2019 in the South East Region:

* Bay Farm - One child died in a fire