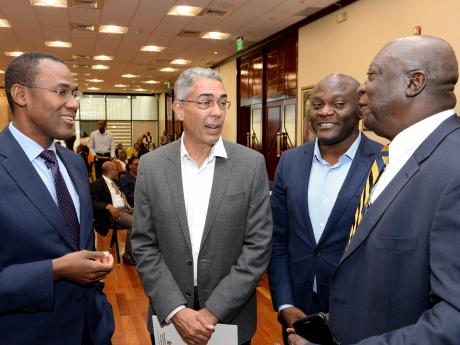 Jamaica's Finance Minister Nigel Clarke has suggested that the fluctuations in the value of the local currency may be due in part to the failure of businesses to adequately budget for their foreign currency needs.

According to Clarke, the fluctuation is a function of demand and supply associated with a flexible exchange rate regime and is urging businesses to properly budget for their foreign currency needs.

In explaining the reason for the swings in the currency value, he noted that in some instances, businesses developing and executing plans requiring foreign exchange do not do so uniformly throughout the year.

“So, you can have temporary imbalances during the course of a year… and that can lead to the exchange rate moving in one direction or another. Operating in [an economy] where we have a market-determined foreign exchange rate requires businesses and financial institutions to evolve in order to be able to exist,” he explained.

Clarke, who was speaking at a Foreign Exchange Market Development Symposium at the Bank of Jamaica (BOJ) Auditorium last week, cited a number of indicators to show that the economy is on a positive path.

“We [have] entrenched low and stable inflation over several years, continuous economic growth over 17 quarters, the lowest unemployment rate ever, and the highest foreign reserves that we have had in Jamaica’s history,” he noted.

In addition, he said that Jamaica has attracted foreign direct investments (FDIs) equating to five per cent of gross domestic product (GDP) per annum over the last three years, and that the current account deficit has averaged about three per cent of GDP annually over the same period, resulting in a “very healthy excess” of foreign reserves.

He expressed the hope that the symposium will be the first in a series of public education sessions “that will allow this evolution to take place as smoothly as possible”.

The forum formed part of a joint sensitisation thrust by the ministry and BOJ, to heighten public awareness about foreign exchange market developments.