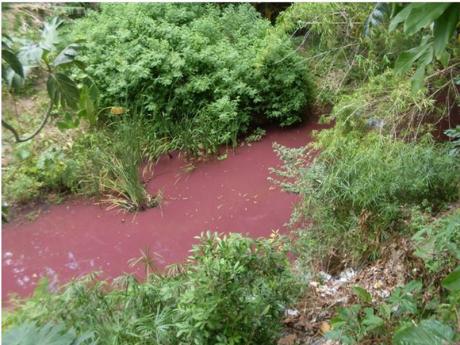 The National Environment and Planning Agency (NEPA) is reporting that the 'reddish-pink' discolouration of the Outram River in St Mary may be as a result of an algal bloom known as 'red tide'.

​An algal bloom or algae bloom is a rapid increase in the population of algae in freshwater or marine water systems and causes the discolouration in the water from their pigments.

NEPA says it is awaiting the outcome of laboratory analysis for confirmation.

It says a joint site visit was conducted by a team from the agency, the St Mary Municipal Corporation and the St Mary Health Department last week Thursday to investigate the possible sources of the discolouration.

NEPA added that it completed ‘ground thruthing’ activities along the corridors of the river aimed at identifying possible anthropogenic (man-made) influences on the river.

Richard Nelson, Senior Manager, Environmental Management, NEPA explained that, “during the investigation it was noted that the mouth of the river was blocked off from the sea and that there was very little flow of water in the upper sections of the river."

NEPA says it will continue to work with the St Mary Municipal Corporation and the Water Resources Authority should corrective measures, based on the results of the analysis, becomes necessary.