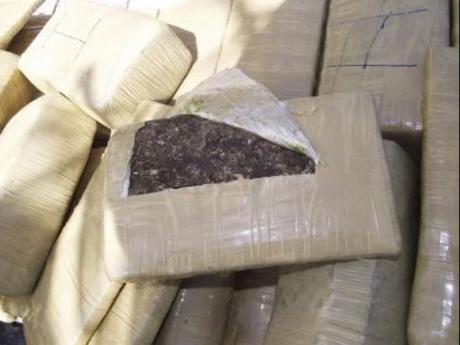 Members of the Narcotics Division seized approximately 1300 pounds of compressed ganja during an anti-narcotics operation along the Water Wheel main road, Cave district, Westmoreland on Tuesday.

The police report that about 1:40 p.m., a freightliner truck, which was suspected to have been carrying the illicit drug, was signalled to stop.

The driver disobeyed, sped off and was pursued by the police.

The police say a roadblock was established to intercept the vehicle.

According to the police, the occupants of the truck opened gunfire on the team, which returned the fire.

The driver reportedly used the truck to attempt to mow down the cops.

The police say the truck subsequently crashed into a Toyota Voxy motorcar occupied by police personnel.

They say the driver continued his wreckless attempts to escape when the truck crashed into an  Isuzu motor truck injuring its occupants.

The truck reportedly then crashed into a Toyota Camry motorcar and then into a perimeter fence.

The police say the driver and three occupants of the truck attempted to escape but were accosted.

The police say a search of the truck resulted in the seizure of 170 parcels marijuana.