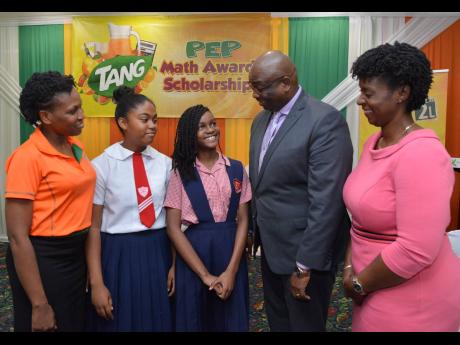 Tang Brand Manager Shellian Thompson on Tuesday issued a challenge to other members of the private sector to join the push to promote excellence in mathematics, given the urgent need for improvement in this subject among Jamaican students.

She made the call as she addressed the annual Tang Math Award Scholarship presentation ceremony at The Knutsford Court Hotel in New Kingston.

“Tang as a brand is committed to adapting and evolving to ensure that we continue to remain relevant and impactful. We, therefore, support the ministry’s renewed focus on [improving] the critical-thinking skills of our children because they aren’t just competing in Jamaica, but also against children in Japan, South Korea, China, [and] other countries around the world.

“Therefore, it is imperative that we take the necessary steps to ensure that this generation is equipped with the tools they need to grow and achieve their goals. This is one of the main reasons why Tang has highlighted mathematics as area that needs sustained attention in order to reach a level of excellence,” Thompson said.

Three students – all girls – were declared winners for Cornwall, Middlesex and Surrey based on their impressive showing in mathematics in this year’s Primary Exit Profile (PEP) examinations.

Cornwall’s Zoe Hume of Howard Cooke Primary, who will be attending Mount Alvernia High in September, and Surrey’s Gabrielle Nelson, who attended St Richard’s Primary and will be going on to Campion College, were on hand to receive their awards. Middlesex’s Shauna-Belle Ellis from South Borough Primary, who heads to the Immaculate Conception High School, was represented by her mother.

The awards programme, now in its ninth year, was modified to factor in the change to PEP from the Grade Six Achievement Test and Thompson had a pleasant surprise for the awardees with news that the amount had moved up from $50,000 to S60,000 per scholarship.

The brand manager of Tang – which is distributed by Facey Commodity – continued her appeal for help in promoting excellence in mathematics, given its critical role n national development.

“It is no secret that in this year’s result, math was one of the areas of focus and needed improvement. We hope that more stakeholders will come on board to help us to better the results in this subject for next year and beyond. Math is too important an area for us to lag behind,” Thompson urged.

“We at Tang are very proud of your achievements which should not be taken lightly. It was because of long hours, dedication and perseverance why you are all here today. As you move forward, I want implore you to continue to work hard. Nothing in life will come easy but that should never deter you,” she implored the awardees.