Andre Richards: A man on a mission 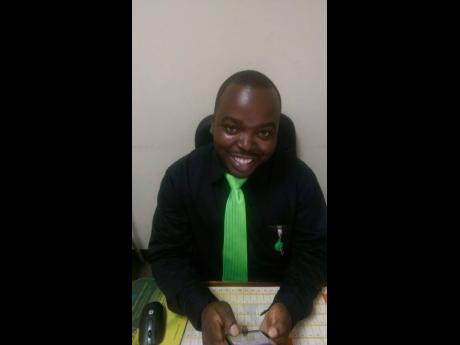 From a rural farming community called Somerset, located in cool, cool Manchester, hails a man who believed in himself and has attained what once seemed unachievable.

André Richards, senior demographer at the Planning Institute of Jamaica (PIOJ), explains that he dealt with each aspect of his life “little by little”, but has attained much as a result.

“Growing up, life was okay. My father was a farmer and my mother was a housewife. My father raised animals and planted crops so we were never ‘food poor’, but materially, we were poor,” he noted.

Richards shared that while attending Somerset All-Age School, he did not realise that he was poor until he passed the Common Entrance Examination for Manchester High School.

However, his status did not prevent him from dreaming, noting that he predicted going to his alma mater when he was in the fifth grade.

“In grade five, I remember writing a draft application letter and in it I put that I am a graduate of Manchester High School and added all the qualifications that I thought would get me hired as a lawyer, because that is what I wanted to be,” Richards stated.

Obviously ambitious, he worked hard and graduated from fifth form with seven subjects, before moving on to sixth form, where he was appointed deputy head boy. Richards soon applied to The University of the West Indies (UWI) to make his dream of becoming a lawyer possible.

“I applied for law and journalism, and got in for neither of them!” Richards said.

To this end, he accepted an offer to study history and archaeology.

“While studying history and archaeology, family members would ask what I was studying and when I told them, they would question the kind of job I could get with that degree, because during that time the acceptable careers were doctor, lawyer or teacher,” explained Richards.

There was also added pressure, as he was the first person from his family to make it to university. Soon, he too said that ‘this isn’t going anywhere’ and pursued a degree in economics with a minor in demography.

“I fell in love with demography so much that I upgraded it to a major, so now I was doing a double major,” he said.

Shortly after, 2009 came around and Richards had completed his time at the university. He soon questioned, ‘What am I going to do?', especially with student loans to be paid.

“I was a student assistant in the principal’s office while I had my degree, and a lady asked me if I didn’t have a degree to which I answered yes, and I was hired temporarily as a research and administration assistant in the principal’s office,” he explained, “I soon lost that job because they downsized, but I was recommended to another job on campus as a customer service representative in the Office of Graduate Studies.”

While there, one of his lecturers encouraged him to work on the 2011 census with the Statistical Institute of Jamaica (STATIN).

“This job with STATIN led to me being employed there for six and a half years before moving to another department, and subsequently leaving in June 2017.”

During his time at STATIN, Richards pursued a master’s degree in demography and applied for his current position as senior demographer at PIOJ.

“Being here has been an eye-opening experience. Here, I see how the data collected from STATIN is used to make policies for the Government,” he said.

Richards recalled a time when doubt crept in and he had to turn to his mentor, Ian Reid.

“I had gotten through to attend UWI and I started to worry because I didn’t see the money, so I went to him and he said to me, ‘The same God who brought you through the seven years of high school when you didn’t have it, will do it again’, and I have held on to that,” Richards said.

He continued by explaining that while at the UWI, he planned for each year, and when he made it to the end he would celebrate, taking it ‘little by little’. This is the same encouragement that he gives to others who may be in a similar position as he was.

Richards also encourages family and friends to be passionate about their career of choice. They should hone their craft and invest in it so it can grow, because there is no ceiling on what one can achieve.