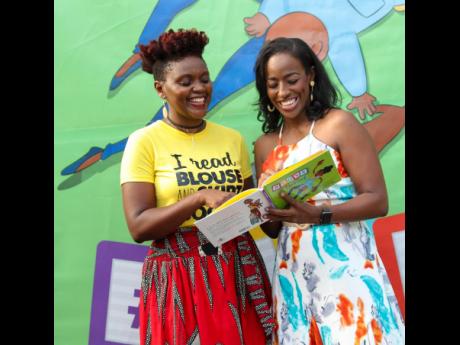 The Tree House at Hope Zoo was recently the scene of a truly joyous event, the launch of the humorous and candid adult picture book by well-known broadcaster, mother, and first-time author Carlette DeLeon. A simultaneously riotous and touching debut, Joys of Parenting chronicles the joys, pains, spills, hits, and misses of motherhood.

The work, which is beautifully illustrated by Keddan Savage and Patrick Meikle, was unveiled to the gathering of friends and family who came together to celebrate this new chapter in DeLeon’s career. There were readings of excerpts of the book by entertainer Craigy T, as well as entrepreneur Dania Beckford. Musical vibrations were provided by DJ Kurt Riley as those in attendance sipped on the specially created ‘Joys’ cocktails and other treats.

A noted broadcaster and public relations specialist, DeLeon has put together a colourful, hilarious, and intimate portrayal of the daily struggles and triumphs of modern parenting, inspired by her own roller-coaster adventure in motherhood.

“I started to write this as a way of dealing with the stress of parenting,” said DeLeon. “I found that sharing my experiences with other parents helped to reveal that all parents faced the same rites of passage. It was liberating.”

The book serves up colourful vignettes of bath time, bedtime, and everything in-between, including those existential questions from the curious mind of a toddler, such as, “Do shoes eat dirt?” or, “Why aren’t rainbows round?”

Joys of Parenting doesn’t shy away from the challenges of parenting, and the author remarked that even in this modern world, the presence of technology hasn’t changed that it still often takes a village to raise a child.

“All parents – moms, dads, grandparents, aunts, and uncles – provide nurture in special and necessary ways. The joys extend to all, not just moms,” DeLeon said.

The author noted that she opted not to go towards a how-to book because it was far more rewarding to simply share the experience. “By being personal, by baring my soul, complete with equal portions of tears and smiles, I accept that there are no shortcuts to being a good parent. It takes work – the hardest, most exciting, most rewarding work of my life,” she said.

Joys Of Parenting joins the growing cadre of adult picture books, a genre once as rare as a well-rested mom, and is published by Blouse & Skirt Books, an imprint of indie press Blue Banyan Books.