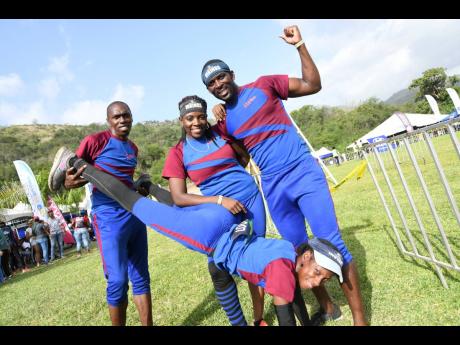 Rudolph Brown
The fun and games, mixed with hard work, paid off for Supligen Vikings, who were the overall winners of the Guardsman Games. From left: team members Allay Ashman, assisting ingrid Blackwood in a high plank push-up, winner of the elite females 2019 title, Francine Brown and Gavin Francis struck a pose for our cameras.

It was survival of the fittest at the highly anticipated Guardman Games, held at the Hope Gardens last weekend. Hosted by the Guardsman Group Foundation, individual and group competitors came out in their numbers at the crack of dawn to test their endurance, stamina and agility in strenuous obstacle courses. They made the Sunday one to truly remember for both themselves, as well as the sea of spectators cheering them on to victory.

Going above, below and beyond challenges through hills and ­valleys, sponsors, companies, solo competitors and other teams anticipated the unexpected with one goal in mind: to complete the run in record-breaking time. Every point counted, so it was important for the individual to remain focused and for the groups to double up in that regard, adding teamwork to their approach.

Competing in the heat of the blazing sun until dusk, many anticipated the final results of the day’s spectacular team showcase. In the end, it was a clean sweep for Supligen, who came fourth (Supligen Warriors), and collected the main prizes for third (Supligen Spartans), second (Supligen Troopers) and first (Supligen Vikings) place.