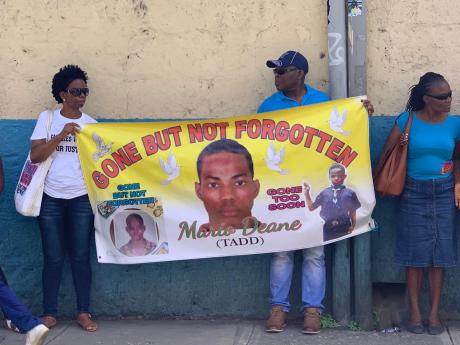 Mercia Fraser (left) and some of her supporters stand outside the Barnett Street Police Station, in St James, holding a banner bearing a picture of her slain son Mario Deane.

Mercia Fraser this morning led a protest outside the Barnett Street Police Station, in St James, adding another chapter in her quest for justice for her late son Mario Deane.

Deane died on Independence Day 2014, three days after a brutal beating while in custody at the Barnett Street police lock-up.

Fraser and her supporters have protested outside the police station every year since her son's death, which sparked widespread public outrage.

For Fraser and those who have joined her quest for justice, the station has become a symbol of police brutality and injustice

“I am frustrated with the long time it is taking to get justice, but I am not giving up”, she told The Gleaner amid the protest

“This is about keeping a promise I made to my son on his dying bed.”

Like in previous years, passers-by, including motorists, showed their support by honking their horns.

Fraser and her supporters were allowed by police personnel to stage their protest action on the sidewalk at the entrance to the Barnett Street lock-up.

Three members of the Jamaica Constabulary Force who were on duty the night Deane was killed and three inmate, believed to be of unsound mind, are now facing criminal charges arising from the death 31-year-old construction worker.

Fraser has publicly expressed her frustration with the slow pace at which the case has made its way through the court system.