High dependency units to be in operation by year-end 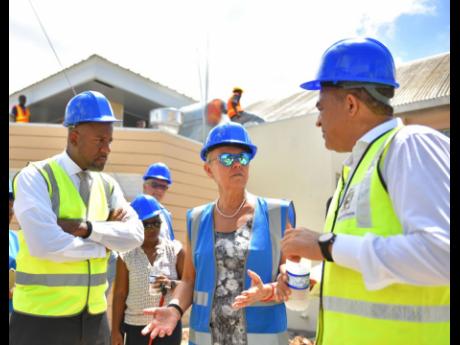 Contributed
Minister of Health and Wellness Dr Christopher Tufton (right) and director general, Planning Institute of Jamaica, Dr Wayne Henry (left), listen to Head of the European Union Delegation to Jamaica, Malgorzata Wasilewska, during a tour of the construction site for a high dependency unit at the Spanish Town Hospital in St Catherine on Wednesday.

Work on the high dependency units (HDU) being built at four hospitals to care for high-risk expectant mothers and premature infants are expected to be completed by year-end.

“We should get all of them (completed) by the end of October, maybe early November, but certainly during the course of this year,” said Minister of Health and Wellness Dr Christopher Tufton.

He was speaking during a tour of the project site at the Spanish Town Hospital in St Catherine on Wednesday.

In addition to Spanish Town, the others are being built at the Victoria Jubilee Hospital, the Bustamante Hospital for Children, and the St Ann’s Bay Hospital.

The HDUs are being established under the European Union (EU)-funded Programme for the Reduction of Maternal and Child Mortality, which is aimed that providing access to quality care for pregnant women and babies in order to reduce the level of pregnancy-related mortality and morbidity.

Dr Tufton said that the units will “provide advanced care for serious cases, give support to our maternal services, and cement the partnership between ourselves and the European Union in public health, which we fully appreciate. “

The new HDU at the Spanish Town Hospital is being built adjacent to the maternity ward and will consist of a maternal unit and a neo natal unit.

The maternal unit will have five sections for mothers who are in need of critical care and an isolation area, while the neo natal unit will have six individual sections and two isolated areas for critically ill babies.

Head of the EU Delegation to Jamaica, Malgorzata Wasilewska, said she is “very impressed” with the work under way.

“It is a welcomed addition to the hospital and, hopefully, it will improve the healthcare that the hospital can offer to mothers and newborn babies,” she said.

“We have, in our nursery, about 40 babies on average per day. Of that, at least a quarter of them will need critical care and one-on-one nursing, so this will certainly ramp up our capacity to deal with that type of care for our babies,” she noted.

“These units will have equipment … to support these [critically ill] babies,” she added.