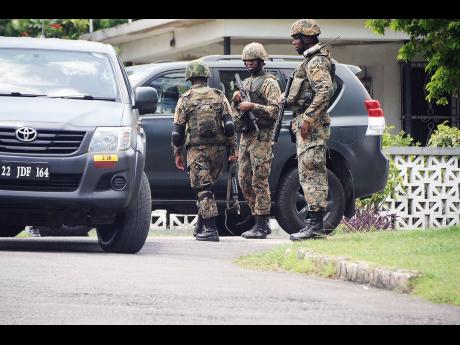 A female student of the Flanker Skills Training Institute in Montego Bay, St James, is fortunate to be alive today thanks to a team of quick-thinking Jamaica Defence Force (JDF) soldiers.

According to reports, the student lost consciousness and passed out during a meeting at the institution on Tuesday.

The soldiers, who were visiting the institution, saw what was happening and immediately sprang into action.

They picked her up, rushed her to their JDF service vehicle and began the journey to Cornwall Regional Hospital's expanded Accident and Emergency Department, located in downtown Montego Bay.

The JDF says during the trip, it was noticed that the young woman was having difficulty breathing on her own, prompting one of the soldiers, Staff Sergeant Walker, to administer emergency Cardiopulmonary Resuscitation (CPR).

“When I noticed that she was not breathing, my mind quickly went back to my training”, says the army quoted Walker as saying.

“My immediate focus then was to ensure that her heart was beating and her lungs moving”, he added.

The young woman began breathing again, but according to Walker, she was not able to sustain it.

“So I had to keep giving her mouth to mouth resuscitation”, he said, pointing out that the slow moving traffic quickly raised concerns about whether they would make it to the hospital in time.

According to the army, that’s when Walker’s colleagues got off the service vehicle and ran ahead to help clear the traffic leading to the health facility.

When they arrived, the student was rushed to the emergency room where it was reportedly discovered that she suffered a panic attack which constricted her air ways and cause her to lose consciousness.

She was stabilised and discharged almost an hour later, the JDF said.

The army praised Walker and his colleagues for their quick action which saved the young woman’s life.