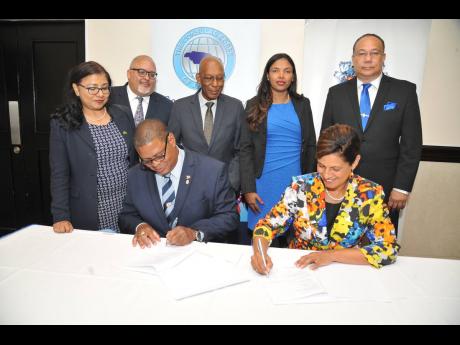 The University of the West Indies (UWI) Open Campus and the Consular Corps of Jamaica have signed a formal memorandum of understanding (MOU) to develop capacity building in international trade and investment and other cooperative agreements.

The agreement aims to facilitate collaboration with the Consular Corps of Jamaica to build capacity through a webinar series on ’International Trade and Investments in Global Markets’. It will also build alliances with the Consular Corps and respective sending states to facilitate cooperative agreements across the globe involving, but not limited to, student exchange, staff exchange or mobility agreements, research, and joint programming.

According to Scott, “this MOU was a historic first for the Corps that, as it is executed, will redound to the benefit of Jamaicans”, noting that it is indeed a proud moment.

Longsworth, in her remarks, noted that, “this MOU with the Consular Corps of Jamaica will expand the relationship between The UWI Open Campus and many of the represented countries. This is in full synchrony with the UWI’s Triple A Strategic Plan which focuses on Access, Agility and Alignment.”