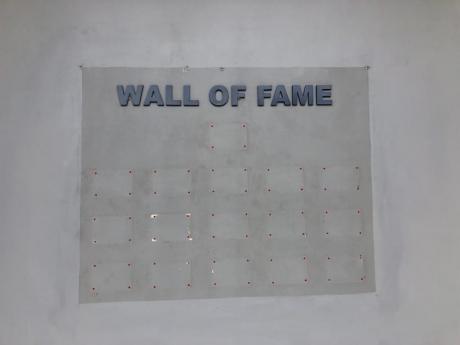 The now blank 'wall of fame' at the Caribbean Maritime University.

The Caribbean Maritime University (CMU) has complied with an order from its council to remove the names on a 'wall of fame' following concerns from some parents of students.

In a release today, the university council said all tiles inscribed with the names of persons who had contributed to the establishment of the Festo Authorised and Certified Training (FACT) Centre at the CMU, including those with discarded Education Minister Ruel Reid and former Energy Minister Dr Andrew Wheatley, are to be removed until further notice.

The university council's instruction for the removal of the wall tiles comes after The Gleaner published a story on Friday highlighting the concerns of some parents. The parents were particularly concerned that the wall displayed of the names of the discarded Cabinet ministers, Reid and Wheatley.

"The decision was communicated to the university administration by the council by way of a letter on Friday and executed that afternoon," the council's statement said.

An earlier version of this story had incorrectly cited the University Council of Jamaica (UCJ) as the body issuing the order. In fact, it was the CMU Council.