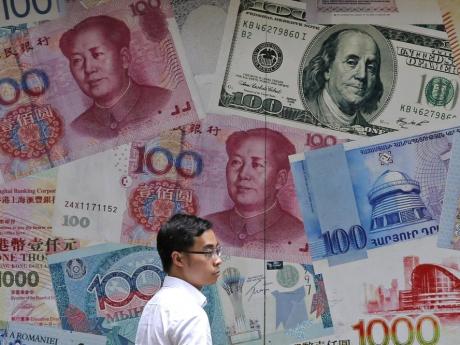 In this June 10, 2019, file photo, a man walks past a money exchange shop decorated with different banknotes at Central, a business district of Hong Kong. (AP Photo/Kin Cheung, File)

WASHINGTON (AP) — President Donald Trump accused China of manipulating its currency after Beijing let the yuan fall to a politically sensitive level against the U.S. dollar for the first time in 11 years.

“It’s called ‘currency manipulation,’ ” Trump tweeted Monday morning, adding that, “This is a major violation which will greatly weaken China over time.”

The currency weakened to 7.0391 to the dollar by late afternoon, making one yuan worth 14.2 cents, its lowest level since February 2008.

The level of seven to the dollar has no economic significance but carries significant symbolic weight.

“The thought of a currency war is crossing more than a few traders’ minds,” Stephen Innes of VM Markets said in a report.

China’s central bank blamed the yuan’s drop on “trade protectionism” — an apparent reference to Trump’s threat last week to impose tariffs September 1 on the $300 billion in Chinese imports to the United States that he hasn’t already targeted.

The U.S. and China are engaged in a bitter dispute over allegations that Beijing steals trade secrets and pressures foreign companies to hand over technology as part of an aggressive campaign to make Chinese companies world leaders in advanced technologies such as artificial intelligence and quantum computing.