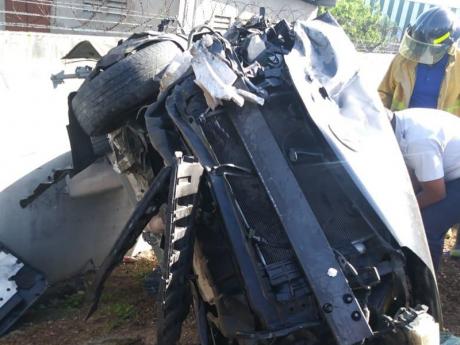 Emergency personnel at the scene of a two-vehicle crash along Dyke Road in Portmore, St Catherine on August 5, 2019 - Contributed photo.

At least three people have died and six others injured following a collision this morning along the Lakespen Main Road in Portmore, St Catherine.

The police say the collision occurred between a seven-seater Toyota Wish motorcar, which was operating as a taxi, and a Subaru Impreza.

It is believed that the taxi was overcrowded.

It is reported that the driver of the Subaru was turning off the main road onto a minor road when it was hit by the Toyota Wish.

The crash happened about 8 o' clock.

The police say the driver of the Toyota Wish and two passengers died on spot.

Five other passengers inside the Toyota received injuries and were taken to hospital.

The driver of the Subaru also received injuries and was taken to hospital.