Jamaica 57 | No time to give up on corruption-free Jamaica 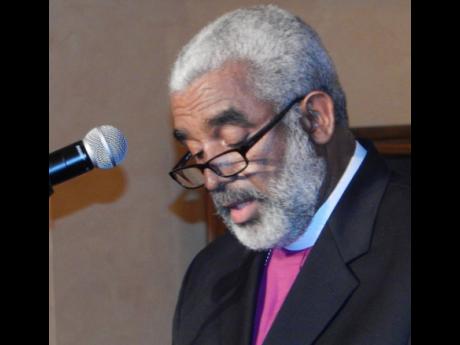 The stench of corruption is one the Jamaican people know all too well. The foul smell has been on the rise in recent months, but history has shown that corruption has been a deep-seated problem in the country, and despite multiple efforts to address it, the results have been less than impressive.

Corruption is often labelled as the source of the country’s wide-ranging problems and there is widespread agreement that addressing corruption will address the other challenges which continually confront the country. A high perception of corruption in Jamaica exists, both locally and internationally.

Jamaica stands as the 70th least corrupt nation out of 175 countries, according to the 2018 Corruption Perception Index reported by Transparency International. Corruption rankings for Jamaica averaged 72.32 from 1998 until 2018, reaching an all-time high of 99 in 2009 and a record low of 45 in 2002.

But, despite these statistics, Suffragan Bishop of Kingston The Right Reverend Robert Thompson believes the country has made advancements on the corruption front after 57 years of Independence, and it is not yet time to throw in the towel in dealing with the issue.

“All of us, including nations, can be redeemed from a life-destructive path. I am very hopeful where Jamaica is concerned,” Thompson told The Gleaner.

“If you feel now that the majority of Jamaicans are corrupt, then possibly, you are probably right in your perspective that in fact ‘it’s a corruption nation and we can’t recover from this’. But I don’t buy that. I do feel however there is hope because there are persons within the nation as a whole who are in the majority who are good people by nature who have fallen by the wayside because of selfish objectives, because of selfishness.”

Inequality at the core

He argue that at the heart of the long-standing issue is inequality that manifests itself, especially in the public sector.

“Where a nation comes together for the collective good of all, not isolating individuals because of party, because of family, giving some a bligh while others will have to suffer through the long lines of regulation. If everyone is given a feeling that they belong, that is, if our politics, our church regulation, our laws and the practice of our police officers treat everyone equally and make us feel like we belong to the collective whole, then I believe we will begin to see some difference,” the senior church bishop reasoned.

The Government over the years has introduced several institutions, a few legislation and working policy framework to address some aspects of corruption.

Thompson specifically mentioned the Electoral Commission of Jamaica as one of the bodies of which the country can be extremely proud.

“Not all electoral malpractices have been removed from the process, but we can still be proud of what we have achieved as a young nation,” he said, adding that there should be insistence that other bodies and anti-corruption authorities do their work in fighting the scourge.

With a stream of recent high-profile allegations, some feel the response from Prime Minister Andrew Holness has been too polished. Thompson recommends to the administration for a form of social contract to bring group together to tackle the problem head-on.

“I am not for one going to write off this country as a corruption nation that has no promise for the future,” Thompson said.

What they have said:

- In March 2006, in her inaugural address, the Most Honourable Portia Lucretia Simpson Miller, Jamaica’s first female prime minister, made the following oath: “I want to pledge to the Jamaican people to work tirelessly to eradicate corruption and extortion. I am committed to their eradication.”

- “Every person who is inclined to engage in corrupt practices must be made to understand that there is someone vest­ed with the necessary authority who will hound him down all the way to prison,” Bruce Golding (April 10, 2010)

- “I should not have the need to remind ministers that they must at all times conduct the affairs of the country with the highest level of integrity.

“But it is important that I repeat it. Corruption will not be tolerated in this Government,” Prime Minister Andrew Holness. (March 7, 2016)

- In the 1940s and 1950s, there were the imprisonments of three Jamaica Labour Party members of the House of Representatives for corruption.

- The selling of farm tickets happened and a minister of government of the 1980s was convicted and imprisoned after the People’s National Party returned to power in 1989. J.A.G. Smith was sentenced to five years in prison.

- During the People’s National Party regime led by Norman Washington Manley (1955-62), there was an incident in which a minister gave a contract to his brother-in-law and he was dismissed from the Cabinet by Norman Manley.

- At the end of December 1991, Patterson resigned from the Cabinet, as did all ministers. Patterson’s resignation coincided with the then growing “Shell Waiver Scandal”. The new Cabinet, announced just after New Year’s Day 1992, did not include Patterson.

- Since the reorganisation of the Jamaica Constabulary Forces’s Anti-Corruption Branch in 2008, with international support, 538 police personnel have resigned or been dismissed for corruption or ethical violations. Another 26 officers faced criminal corruption charges during 2015, with three officers barred from the force for corruption.

- In 2016 a youth survey was conducted by the Office of the Contractor General (OCG), involving 1,262 students from the primary and secondary level. It was done to determine whether or not youth perceive corruption as harmful to the society. Key findings showed that 43.7 per cent of the respondents were exposed to behaviour deemed corrupt to avoid a problem and 40.4 per cent agreed that telling the truth is not valued in Jamaica.