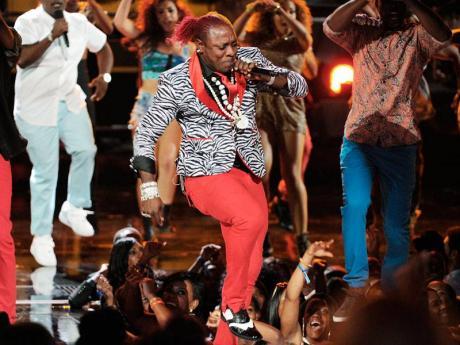 Dancehall artiste Elephant Man is one of Jamaica's most popular figures. He is also referred to as the 'Energy god'.

In recognition of Independence Day, The Gleaner presents #Jamaica57. Part two of our four-part series, takes a quick bounce from music:

Jamaica, a tiny island in the West Indies, has created several genres of music – Kumina, Revival, Mento, Ska, Rocksteady, Reggae and Dancehall – and there's one good thing about it as the 'King of Reggae' Bob Marley sang: when it hits, you feel no pain.

Music played an integral role in Independence and post-Independence as Jamaicans struggled to find her identity and stamp it on the world stage.

Mento
Mento, said to be the first recorded Jamaican sound, pre-dates an independent Jamaica, but it remains important in any reference to Jamaican music genres because of its immense influence on both Ska and Reggae. Mento bands provided music for dances, parties and receptions during the late 1940s and early 1950s, as there were no sound systems or discos at the time. Mento depends on acoustic instruments, such as acoustic guitar, banjo, hand drums, and the rhumba box. Songs such as Healing in The Balmyard, by Harold Richardson and the Ticklers; The Talking Parrot  by Count Lasher; and, Dry Weather House by Hubert Porter, are among the lasting legacies of the genre which found success abroad as the ‘calypso’ of Jamaica.

Ska
On the cusp of Jamaica’s independence, Ska, a fusion of African rhythmic elements and European, emerged and became the beat of this early nation. Ska enjoyed its heyday between 1961 and 1965 and has the distinction of being Jamaica’s first commercially recorded music. The traditional ska band consisted of piano, guitars, bass, drums, saxophone and brass, and the dance movements made to the songs was called 'skanking'. Clement 'Coxsone' Dodd, Duke Reid, The Skatalites and Prince Buster all played a defining role in the development of ska. Among the memorable songs are Prince Buster’s Wash Wash and Hard Man Fi Dead; the Skatalites' Rings of Fire, with the brilliant Don Drummond on trombone, and Guns of Navarrone; and The Wailers’ Simmer Down. Millicent Dolly May Small, popularly known as Millie Small exposed ska music on the international scene with My Boy Lollipop, which became the first Jamaican song to make it on the British and American music charts, reaching number one in Britain and number two in the United States in 1964.

#Jamaica57: Jamaica has a strong history in music reaching back to its roots, which was primarily based on drum beats and chants with a touch of European influence. Today, Jamaican music includes not only these roots but the influences of many genres of music. pic.twitter.com/JNiXt18PbP

Rocksteady
Singing snugly between ska and reggae, is Rocksteady, a sound whose creation is credited to musicians who were skilled at playing jazz, and who were also influenced by the American rhythm and blues. This genre originated in Jamaica in 1966 and was built around the 'one drop' drum beat, characterized by a heavy accent on the third beat of every bar. Outstanding groups of this genre were The Gaylads, The Maytals, The Heptones and The Paragons, but it is Alton Ellis who is said to be the father of Rocksteady. Listed among the first Rocksteady singles are: Girl I've Got a Date by Alton Ellis; Take It Easy by Hopeton Lewis; Tougher Than Tough by Derrick Morgan and Hold Them by Roy Shirley. Rocksteady bands, such as Justin Hinds and the Dominoes frequently performed without a horn section and with a strong electric bass line, paving the way for many reggae bands that did the same.

Reggae
Much has been said and much more has been written and sung about the music genre that Frederick 'Toots' Hibbert, front man of Toots and the Maytals, lays claim to naming. Toots has gone on record to say that his song, Do The Reggay was the first reggae song ever recorded. Reggae is more than a genre, it is a tsunami that has rocked the world. The face of reggae is encapsulated in the Reggae Sumfest logo with the Rastafarian, who many presume to be none other than reggae icon, Bob Marley, with mic in one hand, and the other raised high in a fist, with head flung backward, because when the music hits, you feel no pain. UNESCO noted that while reggae started out as “the voice of the marginalised” it is “now played and embraced by a wide cross-section of society, including various genders, ethnic and religious groups.” On Thursday, November 29, 2018, the Intergovernmental Committee for the Safeguarding of the Intangible Cultural Heritage, granted reggae music, the genre that is uniquely Jamaican, a coveted spot on the United Nations’ list of global cultural treasures.

Dancehall
Whereas Bob Marley is the undisputed face of reggae, the legendary Yellowman, has been dubbed by some as the King of Dancehall. The genre which originated in the late 1970s, enjoyed mainstream popularity in Jamaica in the 1980s, and by the 1990s, it was given its passport and could 'fly out'. It was made distinct from reggae by its proponents who were all deejays, rather than singers, and some eventually became known as singjays. Early deejays such as Daddy U-Roy and Dennis Alcapone, were known as toasters and had a melodic style of chanting that is different from what obtains today. Dancehall, has been called the step-child of reggae, and it ignited its followers with themes of gun violence and sexual exploits . Among the heavywaeights in dancehall music are Ninjaman, Sean Paul, Beenie Man, Bounty Killer, Vybz Kartel, Mavado, Alkaline, Spice and Busy Signal.