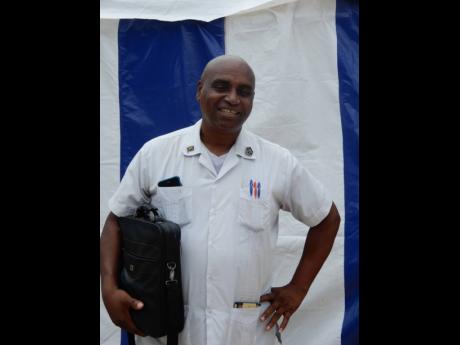 Clive Christopher Campbell is a man on a mission, and it is to eradicate many illnesses, which, he says, don’t have to lead to someone dying.

His brother-in-law, Tony Young, died from complications of diabetes, and he said that his dream is to eradicate all that through the product he came to the 67th staging of the Denbigh Agricultural and Industrial Show in Clarendon to promote.

Campbell is representing Isexperia, a company out of Fort Myers, Florida, that makes more than 40 by-products from the hemp plant.

“The hemp is the medicine of our foreparents. We have been denied 80 years of this medicine, but here it comes, roaring back again. The truth is now being told, and we can now benefit from what hemp offers,” he told The Gleaner.

Using denbigh to spread the word

Campbell said that during the show, he would use his time at Denbigh to sensitise as many persons as possible about the benefits of hemp as he said too many persons die prematurely, age too fast, and are being destroyed because of lack of knowledge.

“Many persons believe that hemp, marijuana, and herb is the same thing, but by classification in medical science, marijuana contains THC (tetrahydrocannabinol), a crystalline compound that is the main active ingredient of cannabis that gives the high, the psychoactive effect,” he said, stating that that effect is not what everyone would want.

The alternative, he said, is the hemp, which he calls “cousin” to the marijuana and one which does not contain THC.

Campbell said it contains cannabidiol, or CBD for short.

“Both of them are called cannabis sativa, but it is like two brothers with two different DNAs. With THC, some persons like the high, the irie feeling. It gives them a meds, and thing like that, but not everybody wants that high that is found in medicinal marijuana,” he said.

Hemp, he said, is used for materials to make clothing, rope, paper, biofuel – you name it – but from a medical standpoint, he said persons who have illnesses such as having suffered a stroke, Alzheimer’s, Parkinson’s, children who are autistic, persons who suffer from depression, diabetes, liver problems can all be addressed through use of the various products.

“Just like everything else, we have to explain to people what the differences are in hemp and marijuana. People like to paint with a broad brush, which is not good, so we have been painting with a broad brush all along. But what is good, last year, 2018, the US government passed the Farm Bill Act, which deregulated hemp and classified it as a cash crop, making it legal in all 50 states,” he said.

Campbell said that for now, the products can be obtained through the company’s website.