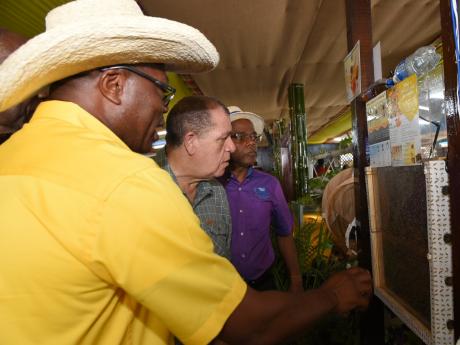 Agriculture Minister, Audley (centre), looks on as Principal of the Ebony Park HEART Academy, Collie Clarke (right), points out features of a bee colony, which was on display at the recently concluded Denbigh Agricultural, Industrial and Food Show held in May Pen, Clarendon. At left is Acting Managing Director at the HEART Trust/NTA, Kevin Mullings - Contributed photo.

Minister of Industry, Commerce, Agriculture and Fisheries, Audley Shaw, says hundreds of small farmers in Clarendon and St Catherine are to benefit from the build-out of irrigation infrastructure under the Essex Valley Agriculture Project.

Shaw noted that the project includes the development of a climate-resilient, off-farm irrigation system consisting of six irrigation wells, four of which have already been drilled.

He, who was addressing the recently concluded Denbigh Agricultural, Industrial and Food Show in May Pen, said that the initiative is aimed at counteracting the impact of drought associated with climate change.

“We have the ambition that between 50,000 and 100,000 small farmers must get access to drip irrigation systems in this country,” he noted.

Meanwhile, Shaw pointed to the need for greater focus on agro-processing for local consumption and export.

“We have to look at improving the value chain of what we produce; it is not about selling everything fresh,” he said, noting that crops like pumpkin and sweet potatoes can be processed and sold to various markets.

Turning to the recently announced National Fruit Tree Planting Programme, Shaw said that the initiative will provide a major boost to the School Feeding Programme by supplying institutions will locally grown fruits.