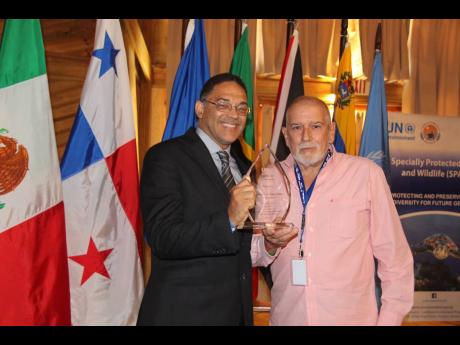 Christopher Corbin (left) presents an award to Licentiate Antonio Villasol, retired outgoing director of Cuba’s Centre of Engineering and Environmental Management of Coasts and Bay, during the recent Meeting of the Contracting Parties to the Cartagena Convention and its Protocols.

MORE THAN 80 regional and international experts, including government officials, non-governmental organisations and United Nations agencies, met in Honduras recently to review the achievements of the Cartagena Convention Secretariat over the last two years and agree on priorities up to 2020.

The 15th Meeting of the Contracting Parties to the Convention, as well as the 4th and 10th Meetings of the Contracting Parties to the Protocols Concerning Pollution from Land-Based Sources and Activities (or Pollution Protocol) and Specially Protected Areas and Wildlife (or Marine Biodiversity Protocol), respectively, were hosted by the government of Honduras in Roatan. It was the first time that a Central American country hosted all three intergovernmental meetings of the UN Environment-administered secretariat.

The Caribbean is one of the most interconnected and dynamic environments in the world, with multiple socio-economic and ecological benefits derived from diverse economies, cultures and ecosystems. The 2016 World Bank report, Toward a Blue Economy: A promise for sustainable growth in the Caribbean, puts the value of the ocean economy in the region at US$407 billion.

Speaking at the opening of the Meeting of Contracted Parties to the Marine Biodiversity Protocol in June, Minister of the Environment for Honduras, Secretary of State Dr José Galdames, urged delegates to “look towards the future and take concerted action so that the conservation of our seas and oceans becomes a reality and allows for development for current and future generations.”

In his welcome address on behalf of the secretariat, Christopher Corbin, programme officer for the pollution and communications subprogramme, noted that the recent development of the new strategy (2020-2030) would enable it to better respond to the needs of governments and position itself to take advantage of new and emerging opportunities.

“Our convention has, and continues to, evolve. Marine biodiversity, land-based pollution and oil spills [are] as relevant today as they were almost 40 years ago. However, the convention makes no mention of ocean-based or blue economies, of micro-plastics, of ocean acidification, sargassum, ecosystem-based management, marine spatial planning, or even climate-change issues that are now critical, if we want to continue on a path towards sustainable development,” he said.

Achievements from the meeting included:

- the adoption of the region’s first State of Marine Pollution Report; and

- the launch of a report on the status of plastics and styrofoam bans in the Caribbean.

It also saw the adoption of new marine protected areas and endangered species under the Marine Biodiversity Protocol. The total number of listed species has now increased to 256 following the addition of the Largetooth sawfish ( p ristis pristis) and the Silky shark ( Carcharhinus falciformis).

Corbin said he was extremely pleased with the “participation and active engagement” by governments and committed the Secretariat to continue to work with governments to promote ratification and implementation of the convention and its protocols.

The meeting concluded with the formal adoption of the work plan and budget of the secretariat for the 2019-2020 biennium.