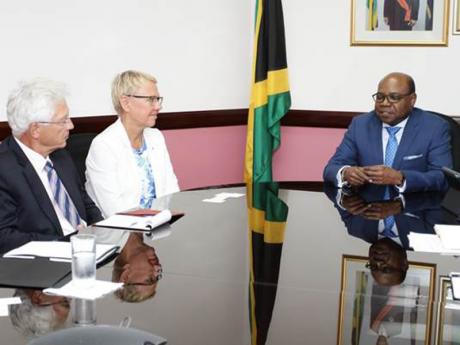 Minister of Tourism, Edmund Bartlett (right) in discussion with Head of the Delegation of the European Union to Jamaica, Ambassador Malgorzata Wasilewska (centre) and His Excellency Dr Bernd von Muenchow-Pohl, Ambassador of Germany at the start of a meeting with several key representatives of the EU to Jamaica on August 7, 2019 at his New Kingston office - Contributed photo.

Minister of Tourism, Edmund Bartlett, says Jamaica is actively exploring additional air connectivity options out of Europe in light of the United Kingdom (UK) leaving the European Union, which is more popularly known as Brexit.

Bartlett made the announcement following a meeting yesterday with several key representatives of the EU to Jamaica yesterday at his New Kingston office.

The countries represented were Germany, Spain, France and Belgium.

“We are taking a proactive step to ensure that air connectivity between Jamaica and Europe remains robust and consistent given the possibility that our current main gateway from that area – the United Kingdom – may leave the European Union.

England’s departure from the EU will impact not just Jamaica but the region and so these discussions are timely and critical,” said Bartlett.

High on the list of topics discussed was the need for a market analysis, including stopovers from low cost European airlines and main market for European visitors to Jamaica, to inform the possibility of an EU Air Services Agreement.

It was also noted that there was precedent for such an agreement, specifically the 2007 USA/EU Air Transport Agreement.

Head of the Delegation of the European Union to Jamaica, Ambassador Malgorzata Wasilewska, who lead discussions on behalf of the EU representatives, noted that, “The United Kingdom has been the historical and traditional door to Europe for Jamaica and with Brexit most likely to take place, there is interest in strengthening relations with Jamaica and the remaining 27 EU Member States to better engage the markets and people of those countries.”

Wasilewska also noted that she would seek further information on a framework within which a collective air services agreement could be pursued by early September.

Minister Bartlett also said, “We will continue bilateral negotiations with individual EU Member States for increased air connectivity between Europe and Jamaica which will include discussions with large carriers from Europe to bridge gaps between the commercial interests, including code-sharing arrangements.”