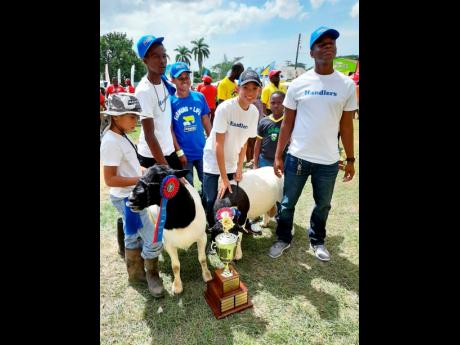 Contributed
Champion Sheep Farmer Noah Vaughn (second right) and his brother Liam (left), along with members of the TrinJam team.

Twelve-year-old Noah Vaughn was crowned the Champion Sheep Farmer at the 67th staging of the annual Denbigh Agricultural and Industrial Show held in May Pen, Clarendon, earlier this week. Vaughn had won the Supreme Champion ram title at the show’s 2018 staging.

“I expected us to get the Champion Sheep Farmer [title] again since we put a lot of effort into the animals, how we feed them, etc,” Vaughn told The Gleaner. His team of the TrinJam farm in Ryhmesbury, Clarendon, also won the Champion Sheep Exhibitor and Supreme Champion titles. The latter was a win the Jamaica College student said the team did not expect. “That [win] made us feel that if you put in the effort, the outcome is greater,” he said. Speaking of the TrinJam Farm, Vaughn said the name was conceptualised as a combination of his parents’ nationalities: “My mom is Trinidadian, and my dad is Jamaican.”

Vaughn added that he had great support from his parents, especially with the preparations for Denbigh. His mother, Dr Gabrielle Young, a veterinarian and co-proprietor of TrinJam Farm, said, “I am very happy for him and very proud. He put in a lot of work and is always contributing and taking care of the animals. He ­demonstrates to other young persons that there is ­success in agriculture.” She said the preparations for the agricultural show were lengthy and tiring, adding, “That’s what agriculture is – it is hard work.”

The young farmer said that he has been part of the show since 2014 and intends to return to the next staging with new animals.