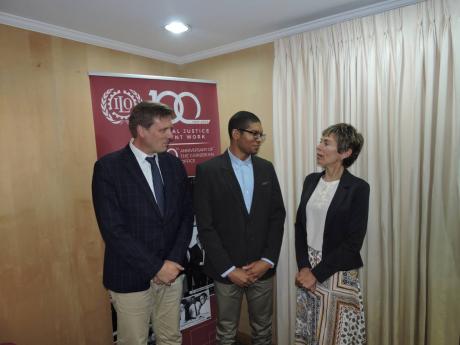 Celebrating how youth envision an inclusive, prosperous and sustainable future of work for the Caribbean was the focus of the International Labour Organization (ILO) Essay Competition Awards Ceremony, held on August 7, in Port of Spain, Trinidad.

Organised in collaboration with The University of the West Indies (St Augustine campus), the essay competition invited undergraduate-level university students from across the English-and Dutch-speaking Caribbean to submit their best ideas on how the region can adapt to transformative changes to deliver economic security, equal opportunity and social justice.

The competition, which launched on April 11 and closed on June 28, sought to raise greater awareness of the ILO’s Future of Work initiative among Caribbean youth as part of its centenary and 50th anniversary in the Caribbean celebrations. Contestants were asked to address the issues presented in the ILO Global Commission on the Future of Work Report, Work for a Brighter Future.

“The report explores how powerful forces such as globalisation; the technological and digital revolution; global warming and climate change; as well as demographic shifts are having profound impacts on governments, employers, workers and society as a whole – including youth,” explains Claudia Coenjaerts, director of the ILO Decent Work Team and Office for the Caribbean. “We launched this essay competition to encourage young people in the Caribbean to propose solutions to the challenges identified in the report.”

A pan-Caribbean panel of judges representing the government, employers’ organisations and workers’ unions presided over 23 submissions before making their selections for the top three winners.

First-place winner Trinidadian Matthue Prescott is a student in the bachelor of science programme in international management at the University of the West Indies Open Campus. The judges were impressed with his essay, which included reference to ILO standards, as well as recommendations for the Caribbean to effectively adapt to the future of work transformations while mitigating risks. Prescott’s submission also cited efforts in the Caribbean to advance renewable energy and green enterprises, and he highlighted Barbados as an example where green initiatives are being created and implemented.

“I tried to take a holistic approach to writing the essay,” said Prescott. “I took time to write the essay, to study and learn about the research that the ILO did pertaining to the world, and also how that applies to the Caribbean.”

Omari Obaseki Joseph, who won second place, is a national of Saint Lucia who is studying in the bachelor of science in international tourism programme at the University of the West Indies, St Augustine campus. Joseph’s essay also referenced ILO standards and included a focus on youth employment and development to meet new skills requirements. He also recommended that Caribbean countries invest in affordable, state-of-the-art information and communications technology in order to create jobs, improve productivity and build more competitive economies.

As first-and-second place winners, Prescott and Joseph receive full scholarships that include tuition, subsistence allowance and travel to attend the ILO’s ‘The Future of Work’ Summer Academy from the 12- 23 of August at the ILO International Training Centre in Turin, Italy.