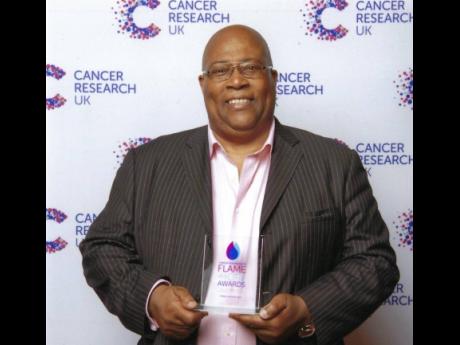 Alfred Samuels, an advanced prostate cancer survivor, was the winner of the Ambassador of the Year Award given by Cancer Research UK (CRUK). CRUK is the world’s largest charity dedicated to saving lives through research. In the 1970s, less than a quarter of people with cancer survived. But over the last 40 years, survival has doubled – today, half will survive. CRUK’s ambition is to accelerate progress and see three-quarters of people surviving the disease within the next 20 years.

Samuels, in accepting the award, expressed his appreciation for the recognition and committed to continuing his commitment to the cause. “I am humbled by this honour, especially as I shouldn’t be alive today after being told by my doctor to think short-term rather than long-term and measure the rest of my life in months. Never giving up was my mental mantle, which further led me to write two books about my journey with the disease: Invincibility in the face of prostate cancer: Coming Out The Other Side and Motivated to Inspire.”

Since being diagnosed with advanced prostate cancer in 2012, Samuels has dedicated himself to raising awareness of the importance of research. He has thrown himself into patient involvement, becoming a media volunteer, a Cancer Campaign ambassador, and a member of both CRUK’s Involvement Network and the Research Strategy Sounding Board.

He is determined to help break down barriers to engagement among the black British ­community and is a strong believer in peer-to-peer advocacy. He interviews other cancer survivors on his podcast and frequently speaks at support groups and community events. As a Cancer Campaigns ambassador, he was involved in an All-Party Parliamentary Group on male cancers and has built up an effective relationship with his Member of Parliament, Barry Gardiner. In all his ­volunteer roles, Samuels demonstrates great ­initiative and exceeds expectations.