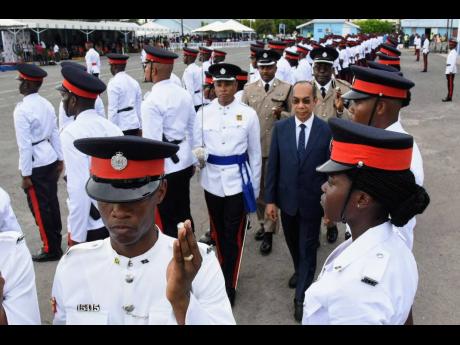 National Security Minister Dr Horace Chang is imploring the latest batch of police recruits to be steadfast in their commitment to safeguarding the society.

Addressing the passing-out parade for 147 new police constables at the National Police College of Jamaica’s Harman Barracks Campus in Kingston on Wednesday.

Chang urged them to make public safety a priority and, in so doing, serve with pride and professionalism.

“Through your efforts, you will be able to reaffirm the Jamaica Constabulary Force (JCF) as a premier force for good, with truly Jamaican characteristics. You will be able to accomplish this through respect for your fellow Jamaicans [and] strong community spirit,” he further stated.

Chang argued that a “novel approach” is needed to curtail the prevailing wave of crime and violence, citing as imperative, the involvement of the men and women of the JCF “who are willing to stand up in defence of what is good”.

The minister described the recruits’ completion of their training as a “true reflection” of purpose, strength of character, and “unwavering dedication to Jamaica”, adding that they have heeded the call to serve and protect Jamaicans with integrity while respecting the rights of all persons.

“The Jamaica Constabulary Force is under pressure, and the integrity of its members is being tested in extraordinary ways. While we can readily identify some of the sources of the pressure, it is equally important for us to implement adequate measures that will improve the efficacy, morale, and professionalism of our officers,” Chang said.

This, the minister pointed out, by equipping them with the best resources for community engagement and crime fighting, adding that the “process of achieving this goal has begun with a comprehensive review of the human requirements of the Force”.

Chang indicated that Police Commissioner Major Antony Anderson is spearheading the JCF’s reform, which aims to identify the quantity and quality of personnel required to transform the organisation’s culture.

The minister said that significant emphasis is being placed on infrastructure upgrading, specialised training, and appropriately equipping the members.

“We are working towards the establishment of a modern, relevant Jamaica Constabulary Force, and the new graduates will be able to inform and influence the outcome of the process,” Chang added.