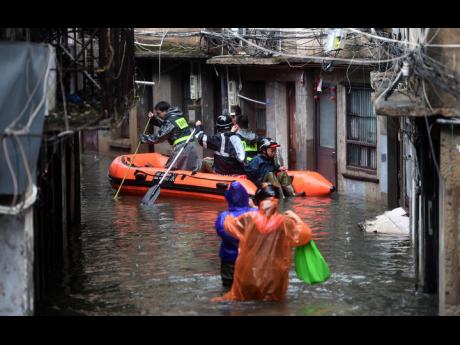 At least 18 people are confirmed dead after a powerful typhoon made landfall in China early Saturday morning.

According to reports, a total of just over one million people have been evacuated from their homes as Typhoon Lekima wreaked havoc in several areas.

Chinese state media also reported that at least 14 people are missing after the storm triggered a landslide in the city of Wenzhou.

Lekima made landfall in the city of Wenling, which is located between Taiwan and China's financial capital Shanghai.

An estimated 2.7 million homes in the region lost electricity as power lines toppled in the high winds.

The storm weakened slightly before landfall, but still packed winds of 116 miles per hour.

The landslide reportedly occurred after water from the typhoon formed a barrier lake or natural dam, which later collapsed.

Lekima is now slowly winding its way north and is expected to hit Shanghai, which has a population of more than 20 million people.

Authorities have cancelled more than 1,000 flights and cancelled train services as the city braces for the storm.

Further, officials in Shanghai have ordered the evacuation of some 250,000 residents, with another 800,000 in the Zhejiang province also being taken from their homes.

The typhoon is expected to weaken further by the time it reaches Shanghai, but is still likely to cause dangerous flooding.