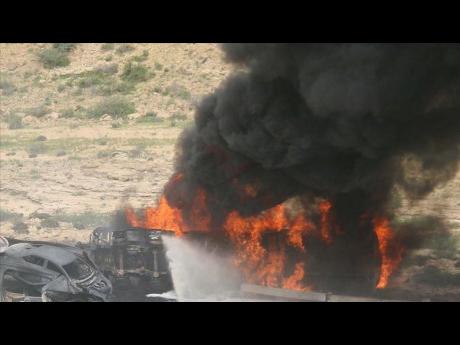 DAR ES SALAAM, Tanzania (AP) — A damaged fuel tanker exploded in eastern Tanzania early Saturday morning killing at least 62 people in one of the worst incidents of its kind in the East African country.

Some of the victims were trying to siphon fuel out of the tanker, according to reports.

Police figures indicate that at least 70 people were also injured in the incident, which happened in the town of Morogoro.

Spokesman for the Tanzanian Government Hassan Abbasi said news of the deaths was “received with sadness.”

“We send our condolences to the families, relatives and friends,” Abbasi said in a message posted on Twitter.

Witnesses told The Associated Press that scores of people had gathered around the fuel tanker after it was involved in an accident early on Saturday.

According to their account, people were trying to siphon away fuel when the tanker burst into flames.

Incidents of people being killed in explosions while stealing fuel from tankers are common in East Africa.

The stolen fuel is usually sold cheaply to motorists.