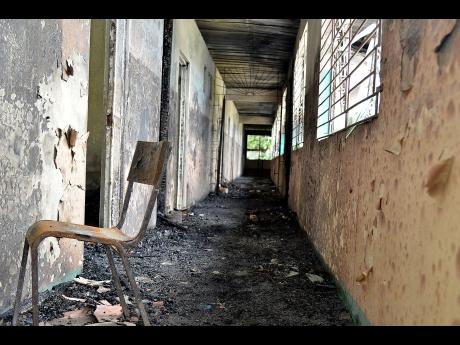 A section of the Jamaica National Children's Home that was destroyed by fire yesterday.

Four days after caregivers at the Jamaica National Children’s Home in Papine, St Andrew participated in a fire drill, fire officials say their actions may have averted a disaster after a fast-moving blaze engulfed the institution last night

The police and the Jamaica Fire Brigade (JFB) have confirmed that none of the 38 children who were being housed at the facility were injured in the fire.

The children, who are between the ages of eight and 17 years old, have since been relocated to another facility.

The JFB says the top floor of the building was destroyed.

The institution will be accepting donations at the premises daily until 5p.m.

But according to fire officials, the incident could have had a different ending.

Acting superintendent for Kingston and St Andrew, Julian Davis Buckle revealed that two children were asleep when the fire broke out shortly after 6p.m.

A fire drill was conducted at the institution on Monday, Davis Buckle told The Gleaner.

She explained that the JFB took the decision to ramp up its inspection of children’s homes and conduct fire drills because of the recent fires at other children’s facilities.

“This fire drill is evidence that if we continue to do them on a regular basis we can save lives”, she said.